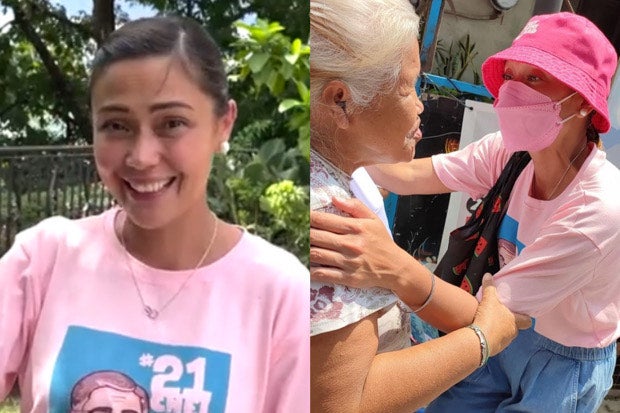 Jodi Sta. Maria has taken part in the house-to-house campaign for her presidential, vice presidential and senatorial bets, a few days before the elections.

The actress walked the streets of Marikina on Tuesday, May 3, and interacted with residents to campaign for Vice President Leni Robredo, her running mate Sen. Francis “Kiko” Pangilinan and senatorial aspirant Chel Diokno. Sta. Maria also spoke about how individuals have made efforts to support Robredo, as seen in a video on Diokno’s Twitter page yesterday, May 4.

(In the past elections, politicians are the ones who spend money to introduce themselves. But I witnessed that now, people are the ones willing to spend and make efforts to support their candidate.)

Sta. Maria mentioned Robredo’s clean track record, which according to the actress assures the public that she will not be involved in corruption.

“Many have known me to be just quiet about certain things and I believe that this is not the time to be quiet about what you stand for. And that’s also the reason why I went out there to show to people kung sino ‘yung mga tao na sa puso ko ay magbibigay sa atin ng pag-asan (which candidates that I believe in my heart would give us hope),” she stated.

(This is not just for me anymore but for all of us, for every Filipino, for the Philippines.)

The actress also gave a glimpse of the house-to-house campaign they did in Marikina, via her Instagram page today, May 5. She showed herself and other supporters wearing pink while speaking to residents and giving out flyers.

(Person to person. Heart to heart. I feel proud to be one of the people who stood for the country.)