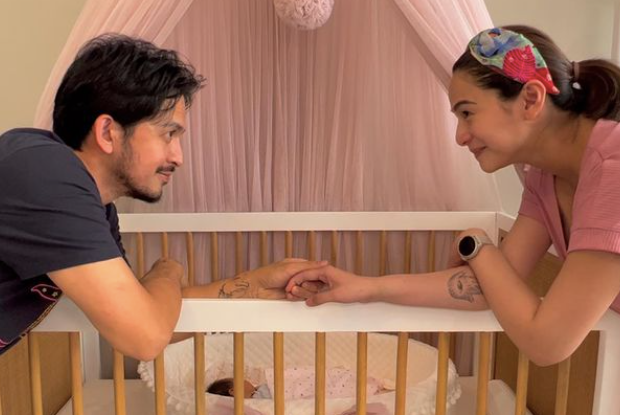 Jennylyn Mercado and Dennis Trillo have finally revealed their presidential and vice presidential bets, saying their choices are for the future of their children.

The celebrity couple can be seen holding hands next to the crib of their newborn baby while they declared support for presidential candidate Vice President Leni Robredo and her running mate Sen. Francis “Kiko” Pangilinan, via Mercado’s Instagram and Facebook pages yesterday, May 3.

Mercado, who had recently welcomed her baby with Trillo, admitted that the events leading up to election day has been “stressful” for her, so she chose to focus on her pregnancy first. However, she felt the need to make a stand especially since her children’s future is at stake.

“[Syempre] hindi rin maari na hindi ako manindigan lalong lalo na ngayon na may bago akong silang na anak. Kinabukasan niya ang nakasalalay dito,” she said. (Of course, it cannot be that I not make a stand, especially now that I have a newborn baby. Her future depends on it.)

Mercado stressed that whoever wins the election will be part of shaping her children’s lives while explaining their criteria for the leaders they will vote for: platforms on education, protection of children’s rights, health and the environment.

(If only we could make a perfect world for our kids, we would do it, right? You know that, mommies and even daddies. But reality is we can only do so much as parents.)

Mercado expressed hope that her children would grow up in a society that is free, safe and full of love. She also wants her baby girl to grow up with a life of honesty and dignity, among others.

Most important for Mercado is that her daughter grows up without fear because she is respected as a woman.

(So this coming May 9, let us vote for a president who is an ultimate survivor like me—Vice President Leni Robredo.)

Mercado commended Robredo for being an “ultimate survivor” as a single mother and for offering programs that help the public despite the limited budget of her office. She also believes Robredo is the “ultimate survivor” for the presidency because she is the “best choice for the job.”

(So I, along with my whole family and Dennis’, support Vice President Leni Robredo to be the next president. Come on bessies, let’s win this election together for all Filipinos….)