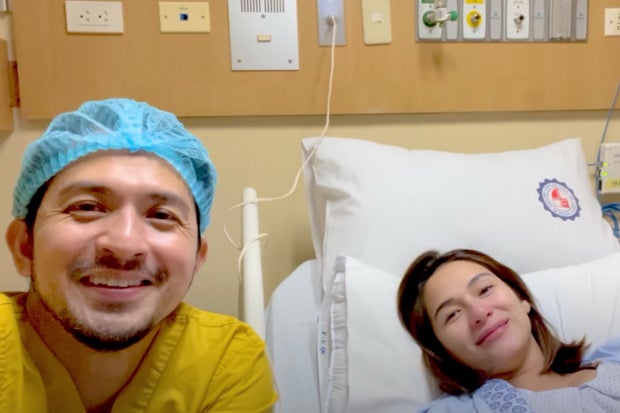 Jennylyn Mercado and Dennis Trillo welcomed their first child together as they gave a glimpse of Mercado’s delivery, which happened last Monday, April 25.

The actress surprised fans with the announcement through a vlog which was supposed to be just a nursery room tour, as seen on her YouTube channel yesterday, May 1. At the latter part of the video, the date “4/25/22” flashed onscreen, then Mercado was seen lying on the hospital bed while Trillo was sitting by her side.

“Checkup lang dapat kami ngayon e, bigla na lang kaming manganganak na daw. Hindi kami ready,” she said. (We were supposed to have a checkup only, then we were informed that I will already give birth. We are not ready.)

Trillo also showed himself in a bathroom wearing a scrub suit and a head cap, stating that he feels nervous before going to the birthing room.

The vlog concluded with a black-and-white photo of Mercado being surrounded by her doctors while giving birth, with Trillo by her side.

Mercado and Trillo confirmed that they are expecting their first child together in October last year, after initially planning to have a baby through surrogacy. They later got married in an intimate civil wedding. JB

Jennylyn Mercado, Dennis Trillo planned to have baby via surrogacy prior to pregnancy