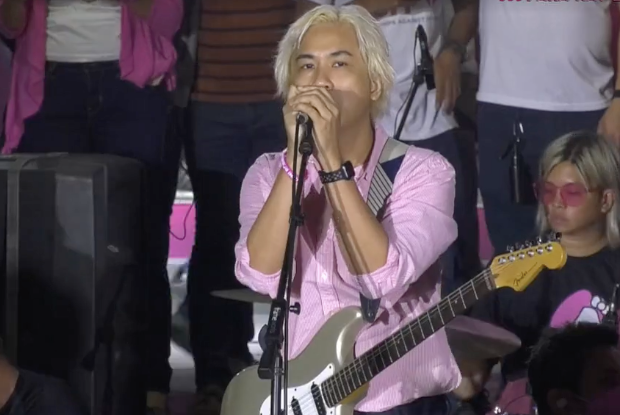 Ely Buendia delighted fans with performances of Eraserheads classic songs during his appearance at an Iloilo campaign event.

Buendia, who wore pink, did the performances in front of a crowd estimated to be 30,000. He also tweaked the lyrics to “Pare Ko” as almost everyone present at the rally danced along and shouted the lyrics to the song.

Robredo’s daughter Jillian, who turns 22 today, meanwhile, thanked Buendia and those who attended for coming to her “birthday salubong,” as seen on her Twitter page, also yesterday.

She also showed herself, her sisters and her mother jumping while Buendia can be heard singing “Alapaap” in the background.

Buendia’s Iloilo appearance may be the closest that Eraserheads fans can get to a reunion of the band, which Buendia jokingly promised last year. Amid clamor from netizens at the time, he explained that his statement was a “half-serious joke.”

His former bandmate and drummer Raymund Marasigan believed that while the remark was funny, it was not considered political and could be carrying a meaning “beyond the tweet.”  /ra