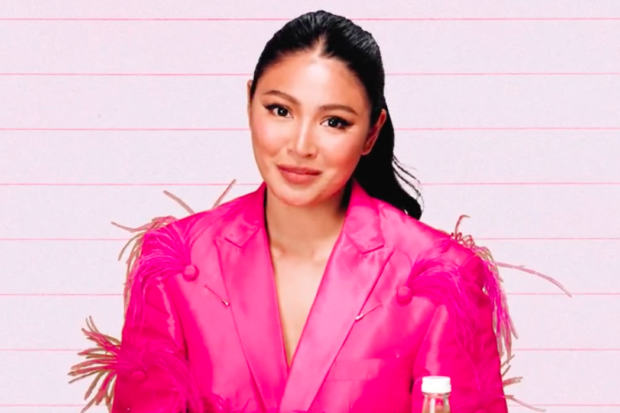 Nadine Lustre, who is referred to by fans as “President Nadine,” has explained her endorsement for her presidential bet as she poked fun at the issues about her through the years.

The actress again expressed support  for her chosen candidate, Vice President Leni Robredo, via a “presidential address” on her Twitter page yesterday, April 25.

The video featured Lustre in a pink suit with a green screen of Malacañang Palace in the background. She can also be seen with a bottle of lechon sauce, reminiscent of her viral photo in August last year, in which she was spotted buying the condiment in Siargao.

Lustre talked about the criticisms and issues she had to face and overcome, assuring that the one who will “replace” her is qualified.

“From bashers, intriga (issues) to fake news left and right. Every year na lang buntis? Wala na bang bago? (I am pregnant every year? Is there nothing new?)” she asked.

“We will make sure na qualified ang papalit sa akin. I know someone who went through worse. Bashers, intriga, fake news for the past six years but she still served tirelessly, faithfully, wholeheartedly,” she added.

(We will make sure the person who replaces me is qualified. I know someone who went through worse. Bashers, issues, fake news for the past six years but she still served tirelessly, faithfully, wholeheartedly.)

Lustre also noted that it takes strength and skill to “drown out the noise” brought by the said situation.

Lustre then described a president as someone who can “make us sleep better at night,” “draw out our goodness” and “make us proud of ourselves.”

Lustre was among the performers at Robredo and her running mate Kiko Pangilinan’s campaign rally in Pampanga earlier this month. At the time, she was given a bottle of lechon sauce by a fan at the end of her performance.

While admitting she feels pressured over being called “president,” the actress feels appreciated by fans because of the internet title.