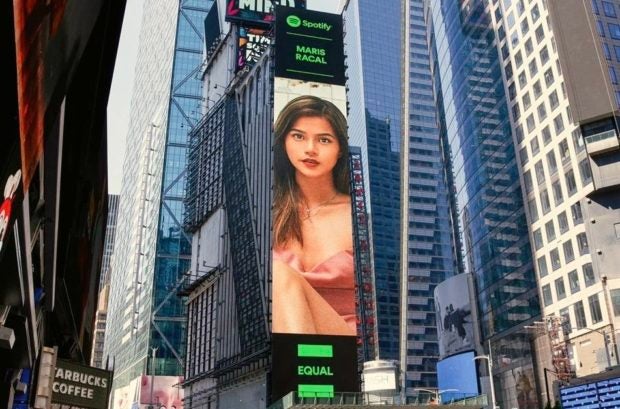 Maris Racal is on cloud nine after she made it to New York Times Square by appearing on a digital billboard for the music streaming platform Spotify.

The actress-singer gushed over the billboard in the iconic intersection on her Twitter page yesterday, July 21. The digital display features a photo of Racal and the logo of Spotify’s “EQUAL” campaign, which aims to empower female artists from around the globe.

Racal also showed herself squealing with delight upon finding out about the Times Square billboard, as seen on her Instagram page, also yesterday.

“This was the moment I learned that my face is up in Times Square. Like. OMG (Oh my God). IS THIS REAL?” she told fans. “I can’t believe nasa New York ako (I am in New York)! Honestly, this inspires me to make more music. Thank you everyone, for believing in me.”

Racal also thanked her boyfriend and fellow musician Rico Blanco who thought of taking a video of her when she saw a photo of the billboard for the first time.

“This moment was perfectly captured,” she added.