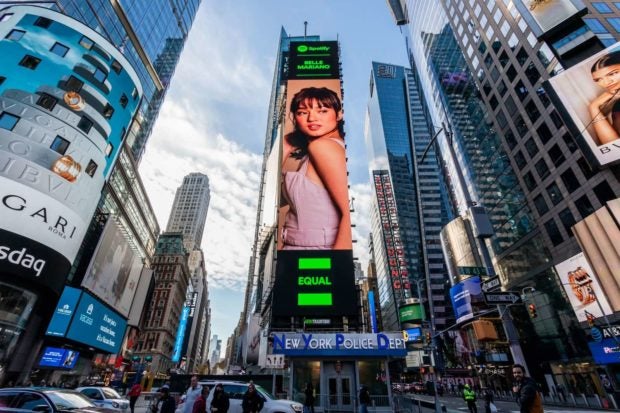 Belle Mariano has made it once again to the iconic Times Square in New York City through a new digital billboard for the music streaming platform Spotify.

The actress-singer’s appearance on the busy intersection was shown by her record label Star Pop on its Twitter page yesterday, Dec. 16.

The billboard features a photo of Mariano and the logo of the music streaming platform’s “EQUAL” campaign, which aims to highlight the talent of female musicians from across the globe. Mariano’s songs “Sigurado” and “Tanging Dahilan” were featured on the platform’s EQUAL Philippines playlist.

“In the middle of Times Square, New York is [Belle Mariano] for @Spotify_PH’s EQUAL playlist! Thank you for the love,” the label stated.

In the middle of Times Square, New York is @bellemariano02 for @Spotify_PH's EQUAL playlist! ✨ Thank you for the love @Spotify 💚

Mariano and her onscreen partner, actor Donny Pangilinan, previously made it to billboards in Times Square, Dubai, Korea and Switzerland as a surprise from fans for their love team’s second anniversary.

The pair, known as DonBelle, recently starred together in the film “Love Is Color Blind.” They worked together earlier this year in the teen romance series “He’s into Her.”

Fellow Filipino singers who have also been featured on Times Square billboards over the past months include Reese Lansangan, Julie Anne San Jose and Nadine Lustre.  /ra