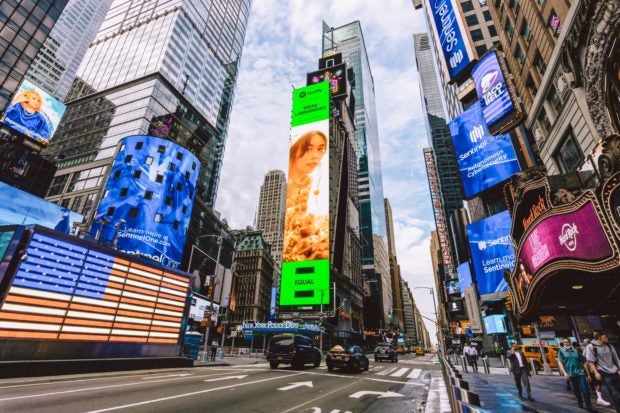 Reese Lansangan could not contain her excitement after she made it to New York’s Times Square, appearing on a digital billboard for the music streaming platform Spotify.

“This is my face in Times Square, NYC. I repeat. Times Square NYC. I am shaking as I type this,” the singer-songwriter announced on her Twitter page yesterday, June 16.

Lansangan also showed a photo of the iconic intersection, where cars can be seen driving past the billboard. The digital display features a photo of the singer and the logo of Spotify’s “EQUAL” campaign.

THIS IS MY FACE IN TIMES SQUARE, NYC. I REPEAT. TIMES SQUARE NYC. I AM SHAKING AS I TYPE THIS. #Reese2ndAlbum ⏳ pic.twitter.com/tBlv7LAeTj

Lansangan also had a video and some polaroid photos of the billboard, as seen on her Instagram page on the same day. The huge digital display showed individual photos of female artists, including Lansangan.

“What is this feeling? That’s my face in Times Square. This is not a drill!” she said.

Shortly after her announcement, Lansangan was congratulated by fellow musicians such as Ben&Ben’s Andrew De Pano and Itchyworms’ Jugs Jugueta.

“This is huge! So proud of you, Reese!” De Pano told Lansangan. Jugueta, meanwhile, sent heart eyes emoji for her.

Lansangan’s second album “Time Well Spent” was launched last month. It includes the tracks “Slow Mornings,” “What Is This Feeling?” and “Orbiting.” It was the singer’s follow up to her debut album “Arigato, Internet!” released in December 2015. JB