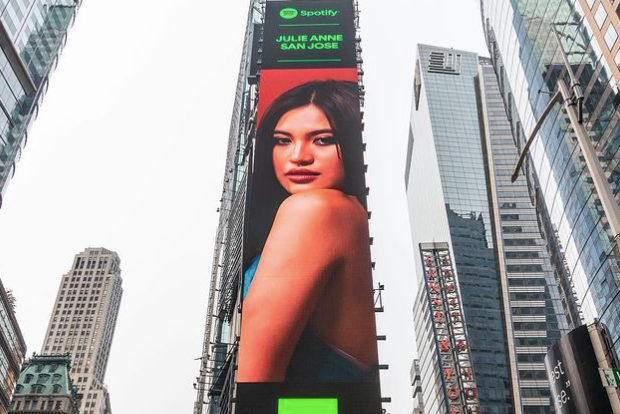 Julie Anne San Jose has made one of her dreams come true after she landed on a digital billboard at the iconic New York City’s Times Square, for the music streaming platform Spotify.

The singer gushed over her appearance on the busy intersection by showing a photo of the billboard on her Instagram page today, July 22. The billboard features a photo of San Jose and the logo of Spotify’s “EQUAL” campaign.

“We made it to Times Square, New York! Just SURREAL,” San Jose said. “Big thank you @spotify. This is a dream come true!”

She thanked her fans for their “undying support” for her and encouraged them to listen to the “amazing and talented women” who are part of the “EQUAL” campaign.

“I couldn’t have made it here without you guys! Maraming maraming salamat at mahal ko kayong lahat!” she added. (Thank you so much and I love you all.)

She then explained that Spotify’s “EQUAL” campaign “aims to femme-power women all around the world.” Aside from the billboard, San Jose was also featured on the platform’s Equal Global playlist alongside Doja Cat, David Guetta and Ariana Grande, among others.

Fellow Filipino singers who have been featured on Times Square billboards over the past months include Reese Lansangan, James Reid and Nadine Lustre. JB

US defense chief arrives in PH, to meet with Duterte