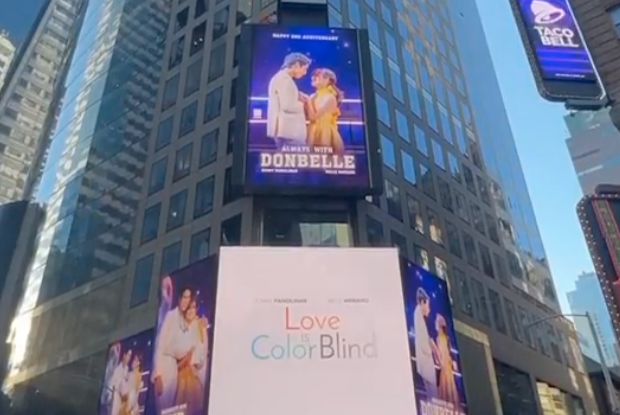 Donny Pangilinan and Belle Mariano were treated to a surprise by fans from all over the world, as they were seen on various billboards in New York, Dubai, Korea and other countries.

The billboards, spotted by Pangilinan and Mariano’s fans across the globe, showed a greeting for the love team’s second anniversary. It also featured the pair in character for their upcoming movie “Love Is Color Blind,” as shown on the fan page @titasofdonbelleofficial today, Nov. 9.

The digital displays were reportedly a surprise from Pangilinan and Mariano’s fans.

The actors made it to billboards in Times Square in New York, a bus station in South Korea, the city of Zürich in Switzerland and Dubai in the United Arab Emirates. Similar displays can also be seen in various locations in the Philippines.

Pangilinan and Mariano, also known as the love team DonBelle, recently starred as a pair in the teen romance series “He’s into Her.” The series finished its first season last July and was greenlit for another season in August.  /ra

WATCH: Donny Pangilinan, Belle Mariano quarrel and flirt in ‘He’s Into Her’ trailer