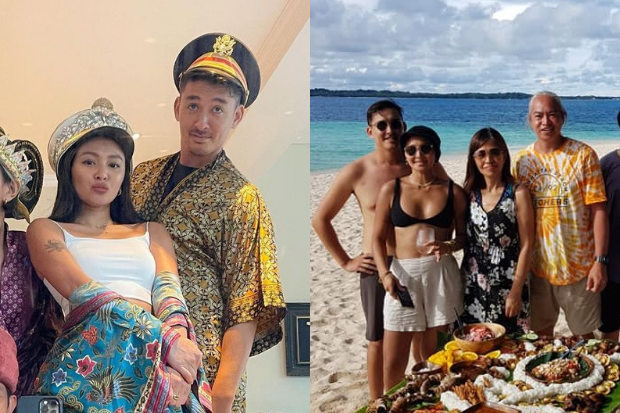 Nadine Lustre with her rumored boyfriend and her parents. Image: Instagram/@rafikimono, Facebook/Ulysses Lustre

Nadine Lustre’s rumored boyfriend appeared to have bonded with the actress’ family, as they were spotted together on a beach trip with her parents.

The actress’ father, Ulysses, showed moments from their family’s trip to Siargao on his Facebook page last Sunday, Nov. 7.

Lustre, her father, her mother (Myraquel) and the man speculated to be her boyfriend were all together, sharing meals by the beach and in a restaurant.

Rumors that Lustre is now in a new relationship, which started after she was reportedly seen with a Frenchman in Siargao last August. She was also seen holding hands with the same man last month. However, she is yet to confirm or deny if the mystery person is indeed her boyfriend.

Lustre was previously in a relationship with actor James Reid. The two, formerly known as the love team JaDine, confirmed their breakup in January 2020.

The pair have since collaborated for Lustre’s visual album “Wildest Dreams,” which was released under Reid’s music label Careless. They were also seen together with each other’s friends and family even after their split.  /ra