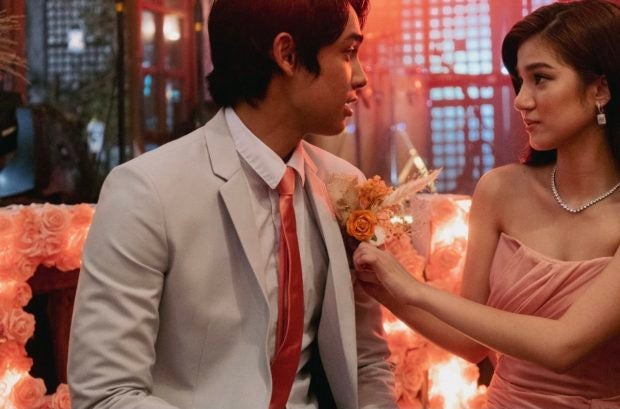 Donny Pangilinan and Belle Mariano took their fans with them to prom night as the pair starred in the music video for Ben&Ben’s “Upuan.”

The video features both actors and the folk pop band preparing for a school prom. It premiered on Ben&Ben’s YouTube channel yesterday, Aug. 29.

It appears in the video that Pangilinan wanted to ask Mariano to be his date for prom, but he missed the opportunity to do so.

On prom night, Pangilinan was searching for Mariano at the venue in hopes to give her a corsage before the event started. But Mariano did not show up until later on, though she bumped into Pangilinan on the dance floor. He offered her the corsage he prepared, and they danced together to the tune of “Upuan” while the band played the song onstage.

It was then revealed that while Pangilinan was sneaking glances at Mariano in class, the actress was also looking at him when he was not paying attention.

The music video for “Upuan” has already raked in more than 1.2 million views, as of this writing.

Pangilinan and Mariano’s appearance in the music video took the top spot on Twitter Philippines’ trending list shortly after it was released, with more than 908,000 tweets as of this writing. Fans also made the hashtag “#UpuanMVOutNow” rank sixth on the list.

“Upuan” was originally released last May as the first single in Ben&Ben’s second album “Pebble House Volume 1: Kuwaderno.” The song talks about the connection between two people who are sitting close to each other.

Pangilinan and Mariano, also known as the love team DonBelle, first starred as a pair in the teen romance series “He’s Into Her.” The series finished its first season last July and was greenlit for another season earlier this month. JB

WATCH: Donny Pangilinan, Belle Mariano quarrel and flirt in ‘He’s Into Her’ trailer