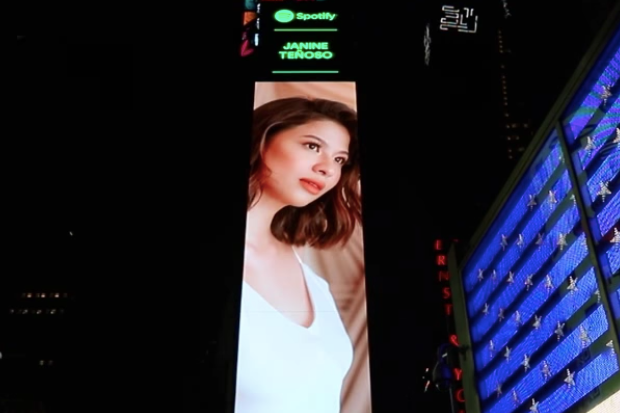 Janine Teñoso has been rendered speechless after she landed on a digital billboard at New York’s iconic Times Square for the music streaming platform Spotify.

“I still got no words. I mean New York [freaking] Times Square?” the singer said as she gushed over her appearance in the busy intersection. She also showed a video of the billboard on her Instagram page yesterday, Aug. 18.

Teñoso was featured alongside Singaporean singer-songwriter Tanya Chua and Thai actress Zom Marie. The digital billboard showed photos of the three women, along with the logo of the music-streaming platform’s “EQUAL” campaign.

The singer urged her fans to support “all our queens” who are part of the campaign, which aims to put the spotlight on female artists from all over the world.

“It’s an honor to be part of the EQUAL playlist alongside these beautiful [and] talented women,” she said.

Fellow Filipino singers who have been featured on Times Square billboards over the past months include Reese Lansangan, Julie Anne San Jose, James Reid and Nadine Lustre.  /ra