Woman who says R. Kelly sexually abused her when she was 16 to resume testimony | Inquirer Entertainment
Close
menu
search

Woman who says R. Kelly sexually abused her when she was 16 to resume testimony 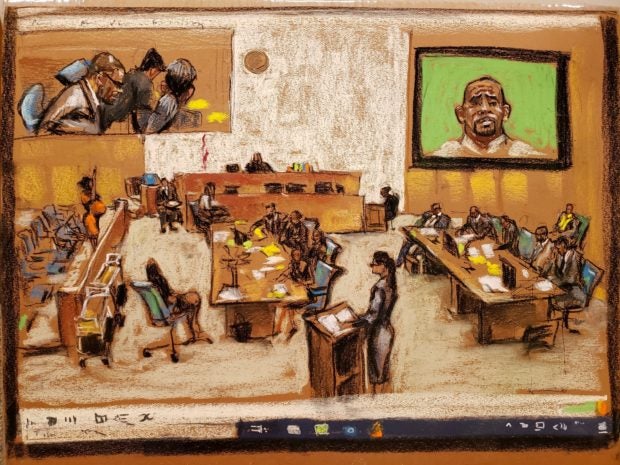 A woman who says R. Kelly demanded she call him “Daddy” when she was 16 and choked her until she passed out is expected to retake the witness stand on Thursday in Brooklyn federal court, in the second day of the R&B’s singer’s sex abuse trial.

Jerhonda Pace, 28, is one of six women and girls, whom prosecutors say R. Kelly dominated and demanded absolute fealty from in a two-decade racketeering scheme where he recruited and abused his victims. They include the late singer Aaliyah, who was 15 when she married Kelly.

Kelly, a three-time Grammy winner whose songs include “I Believe I Can Fly” and “Bump N’ Grind,” has pleaded not guilty to a nine-count indictment that includes accusations of bribery and extortion.

The trial is the culmination of years of suspicions and accusations against Kelly, many discussed in the 2019 Lifetime documentary “Surviving R. Kelly,” and nearly four years after the start of the #MeToo era.

Known as Jane Doe no. 4 in the indictment, Pace testified on Wednesday that Kelly knew she was 16 when they had intercourse because she had shown him identification, but he told her to pretend she was 19.

Once a fan, Pace said Kelly began mistreating her, demanding that she call him “Daddy” and making her ask permission to go to the bathroom. She said the relationship ended after R. Kelly choked her until she passed out.

Kelly’s defense team, which will get a chance to question Pace, said on Wednesday the government’s case had “gaps,” and that Kelly’s accusers wanted to get back at him after their relationships ended.

Prosecutors say Kelly used an entourage of managers, bodyguards and others to recruit victims, and threatened to blackmail them if they fled.

Other female accusers and at least one male accuser are expected to testify for the government, some using only their first names.

Kelly was acquitted of child pornography charges at a 2008 trial in Illinois. He could face decades in prison if convicted. JB