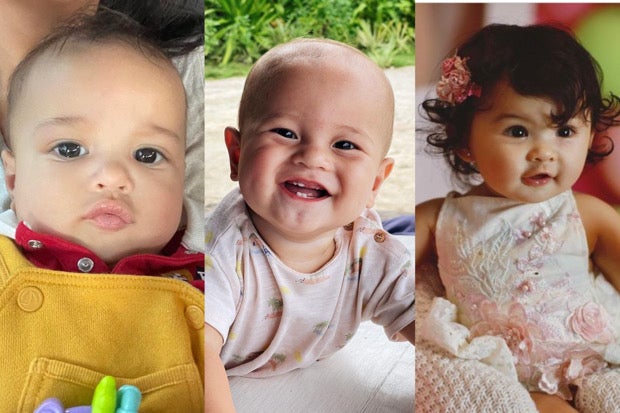 Amid the gloom of continued lockdowns due to the COVID-19 pandemic, families managed to get by and grow. This is true not only for the families of simple folk but in the families of celebrities as well. Fortunately, some of the Philippines’ celebrities have been generous in sharing images and stories about their bundles of joy, which helped fans and showbiz enthusiasts see that despite the times, there lies hope in the cute smiles of these babies. And if there is hope, life can persist.

Here’s a recap of the celebrity babies we got to meet this year:

Starting the list is Andi Eigenmann and fiancé Philmar Alipayo’s baby Koa. Born on January, Koa is Eigenmann’s third child, after Lilo who is her second and Ellie as the eldest. Eigenmann described her pregnancy with Koa as a “breeze,” as she thanked Alipayo for being by her side, saying, “I love love being your partner and going through this wonderful life, raising our kids with you. Glad I get to do this with you for life!”

The second celebrity baby of the year is Mark Herras and Nicole Donesa’s first child Mark Fernando or as what the couple calls him, “Corky.” Born on the last day of January, Corky was announced to the world on Feb. 1 and was baptized on Dec. 21, as seen on Herras’ Instagram page.

Jhong Hilario and longtime partner Maia Azores welcomed their baby girl Sarina in March. Hilario introduced his baby as “Sample Princess,” a play on his nickname “Sample King” which he got from hosting the noontime show “It’s Showtime.”

Another March baby is Rachelle Ann Go and husband Martin Spies’ Lukas Judah, a name which means “bringer of light and [praise].” The “Hamilton” actress announced the arrival of their baby boy on Mar. 30, with a polaroid photo showing the three of them smiling post-birth.

In April, Isabelle Daza and husband Adrien Semblat welcomed their second son Valentin in Hong Kong, where Daza gave birth. The actress-model shared the news on her Instagram page, with a sweet message for her newborn child saying, “Valentin, we are so happy you exist.”

Meanwhile, Roxanne Barcelo gave birth to a baby boy on Jun. 21, which she named Cinco. She announced her pregnancy in January, after revealing that she got married privately to her non-showbiz partner, whom she referred to as “My Creator’s best gift ever.”

Next is Miriam Quiambo’s “miracle baby,” Ezekial Isaiah. The beauty queen, who gave birth at the age of 46, welcomed her second son with husband Christian Ardy Roberto on July 12.

Adding on the list of July babes, Patrick Garcia and wife Nikka Martinez welcomed Enrique Pablo, their first baby boy in the family. Enrique is the couple’s fourth child, following their three daughters Michelle, Patrice and Pia. Garcia announced the arrival of his son in his Instagram page, expressing his gratitude to his wife whom he referred to as the “bravest and strongest woman” he knows.

Vittorio Isaac, Kristine Hermosa and Oyo Sotto’s fifth child, is a Leo babe, born Aug. 3, Vittorio’s arrival was announced by Sotto on his Instagram page the following day, calling him an “answered prayer.” The couple currently has five children, and that’s four sons and a daughter.

Meanwhile, Sam Pinto and her husband Anthony Semerad welcomed their daughter Mia Aya in September. The couple, who are first-time parents, shared the news on Semerad’s Instagram page by showing a photo of his daughter’s hand holding his finger. The basketball player also expressed his happiness as a first time father, declaring, “I’m officially a Dad!”

Landing on the list is another September baby — actor Neil Coleta and his partner Chin Kee’s daughter Jazmin Chinnei. Coleta announced the arrival of his child on Sept. 3 by posting photos of him and Kee holding their newborn baby.

Also an October baby is Kaia Rose, Rachel Peter’s first child with her husband, Camarines Sur governor Migz Villafuerte. The couple, who are first-time parents, shared the news through Villafuerte’s Instagram page. Peter, for her part, then posted about her week-old baby on Oct. 20, calling her “the most precious birthday gift.”

In November, Jewel Mische gave birth to her third child with husband Alister Kurzer, Yzbel Quinn. Yzbel is the couple’s second pandemic baby, which Mische described as “handpicked by the Lord.”

And then there’s Elisse Joson and McCoy de Leon’s baby girl Felize. The couple introduced their child in an episode of “Pinoy Big Brother” last Oct. 31, when they asked Big Brother to be the godfather of Elize. Joson and De Leon’s love story started in PBB, which they cited as their reason for sharing the news at the said reality TV show.

On the last day of November, actress Nadine Samonte has finally showed fans her third child with husband Richard Chua, after a difficult first few months of pregnancy. Samonte was at high risk of losing her baby due to her polycystic ovary syndrome (PCOS) and antiphospholipid antibody syndrome (APAS) diagnoses, but she and her baby survived.

Will there be a few more celebrity babies going to be birthed on the last days of 2021? It remains to be seen, but one thing is for sure — it is not only their famous parents who are happy, but also the fans whose days are brightened by these babies’ life-giving smiles. (written by Anne Pasajol; researched by Sam Mayoralgo)/JB