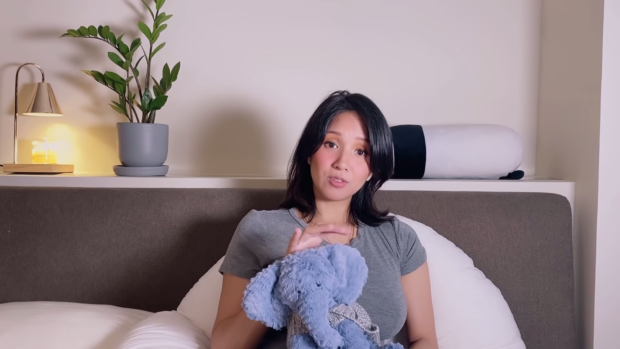 Roxanne Barcelo revealed that she and her husband will soon be welcoming a baby boy, months after announcing her pregnancy.

The actress-vlogger expressed her excitement over the good news in her YouTube vlog last Saturday, April 3. Her husband, whom she affectionately calls “papa panda” did not appear alongside her to deliver the news but asked her some questions that could “trigger her every emotion.”

“My brother-in-law and his fiancée sent us this adorable blue elephant and they also sent a beautiful card when we showed them the ultrasound shots. It said, ‘baby boy,'” Barcelo said while holding a blue stuffed elephant.

She also showed other gifts that other family members sent for their baby, including a knitted baby bonnet with rabbit ears.

“He’s our baby panda. But he also has the freedom to choose if he wants to be an elephant as his uncle suggests, and [as his] aunts suggest, a bunny, we’ll find out,” she added.

Barcelo stated that her best memory in 2021 so far was seeing her baby for the first time through a 4D ultrasound. She also talked about the things she loves about children, and said she loves that kids are “not pretentious” and “very straight up.”

In a heartwarming display of affection, she also told her husband, “You bring out the eight-year-old in me. That’s how I feel when I’m around kids because your heart is just so beautiful and pure.”

Barcelo and her non-showbiz husband tied the knot amid the pandemic, as she revealed on her vlog last December. She then announced her pregnancy last January. JB