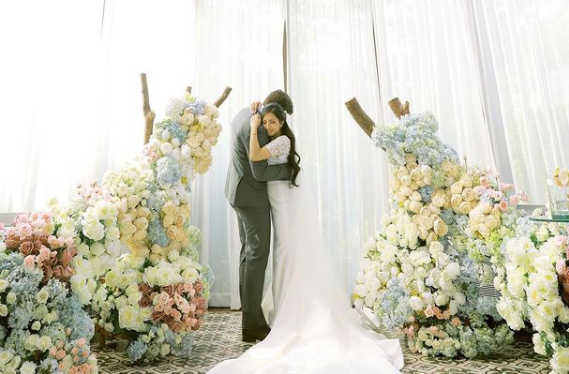 Roxanne Barcelo got married to her partner earlier this year. Image: Instagram/@roxannebarcelo

After getting married amid the COVID-19 pandemic, Roxanne Barcelo received another blessing in the form of her first pregnancy.

The Kapuso star revealed that she and her non-showbiz husband are expecting a baby through her YouTube vlog posted last Thursday, Jan. 21.

While the said vlog is mainly about her and her younger brother Tommy and baking brioche, Barcelo casually dropped the bomb while they were doing so.

“So, while those buns are in the oven, there’s another bun in the oven — my bun is in the oven,” the actress said. “Mga badidap (Barcelo’s fans), I wanted to share with you all that I’m preggo!”

She shared that she and her husband initially thought that it would take them a year to get pregnant as per their OB-Gyne’s advice, but “it didn’t take that long.”

Earlier in her Christmas Eve YouTube vlog, Barcelo revealed that she and her non-showbiz lover got engaged and tied the knot in 2020.  /ra