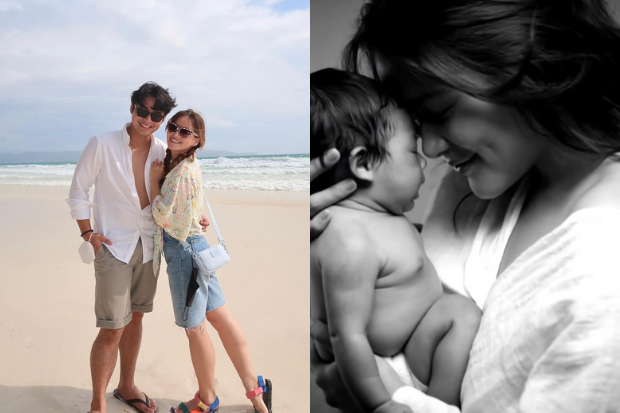 The couple introduced their child by asking Big Brother to be the baby’s godfather on the episode of “Pinoy Big Brother” yesterday, Oct. 31. Their announcement can also be seen on the reality TV show’s official YouTube channel.

The actress added that she and de Leon wanted to share the news on the show because it was where their love story started.

(We know it’s impossible for us to see you but we want to look up to you as a godparent who is so full of wisdom.)

Joson also showed a portrait with their baby, whom she considers their “lucky charm” and “greatest blessing.”

Big Brother agreed to be the baby’s godfather, saying it is an honor to accept the role.

After their announcement, Joson wrote an open letter to her daughter while giving fans a glimpse of the baby’s feet and arms on her Instagram page yesterday.

“Dearest Felize, life was uncertain before you came. I didn’t know which path to take, the choices to make,” she addressed her child. “Now, nothing is clearer to me than to be the best me, to be the best mommy, for you.”

The couple was congratulated by celebrities including Janella Salvador, Maymay Entrata and Ruffa Gutierrez.

Joson and de Leon first met back in 2016 when they both joined “Pinoy Big Brother: Lucky Season 7.” They announced their split in 2018.

The two sparked reconciliation rumors in August 2020, when they went on what appears to be a yacht date. As per reports, they confirmed in June this year that they indeed got back together, even before the pandemic started. JB