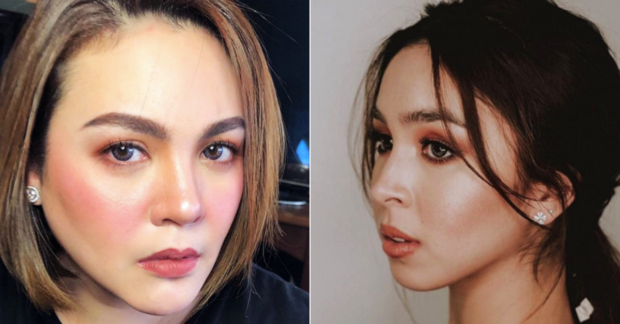 The feud among the Barrettos has yet to blow over, with Claudine Barretto making known her sentiments toward Julia, the daughter of her sister Marjorie.

When Instagram user @ka.ren9381 asked yesterday, March 3, who was a better actress between Julia Montes and her niece, Claudine did not hesitate to say, “JULIA MONTES OFCOURSE (sic).”

One @megaai360 wondered, “Is that an honest answer or just because you [are] still mad [at] your own niece?”

The comments were made on Claudine’s Instagram post yesterday, March 3, where she shared that she went on a date with her mom Inday.

While she has been bonding with some of her family members, she has yet to reconcile with her older sister Marjorie. She shared pictures on the same day of her spending time with brother JJ.

The siblings’ feud reached its peak after the death of their father, Miguel, in October. When President Duterte visited the wake, he asked that Gretchen and Marjorie reconcile, but the latter refused.

Marjorie said she was irritated in part because of businessman Atong Ang’s presence; she claimed he had been romantically involved with both her niece Nicole and Gretchen. She said Claudine lashed out at her while Gretchen and Nicole fought.

During Claudine and Marjorie’s alleged physical altercation, Julia reportedly got involved. The feud has since spilled over into social media, with Julia standing up for her mom and Gretchen attacking her own niece last Oct. 18.

The feud among the three sisters has been going on for years, with sides changing every now and then. It was in early 2019 that Gretchen and Claudine reconciled. They have since been speaking up against Marjorie and her kids, especially Dani and Julia.  /ra

Marjorie Barretto shares side on scuffle at dad’s wake

Read Next
Bianca Umali drops debut single ‘Kahit Kailan’
EDITORS' PICK
Comelec division junks petition to cancel Marcos COC for president
Acer starts the year off strong with the Aspire Vero National Geographic Edition
PH logs 37,070 more COVID-19 cases; over 33K others recover
‘Not yet the end’: Lawyer says Marcos Jr’s DQ cases to take lengthy process
The best of bayside and city living at SMDC’s Sail Residences
Over 3 Million worth of prizes to be won at Smart Padala’s SENDali Manalo Promo!
MOST READ
NBI foils escape attempt of Kerwin Espinosa, two others
‘Not yet the end’: Lawyer says Marcos Jr’s DQ cases to traverse lengthy process
Wendell Ramos finally gets to hold his newborn for the 1st time
Marcos camp ‘extends hand of unity’ after COC cancellation bid is thrown out
Follow @NGunoINQ on Twitter
Don't miss out on the latest news and information.