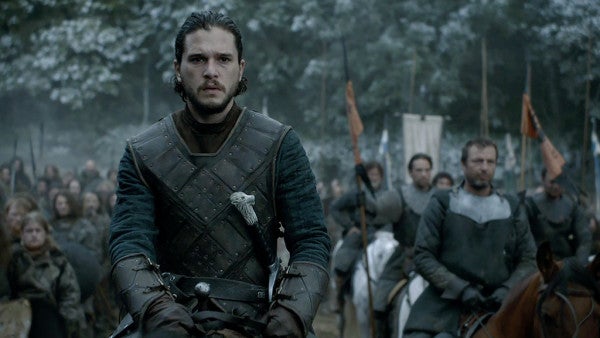 The past episodes are expected to lead to the climactic “Battle of Bastards” where some must die so others may live.

In Slaver’s Bay, Tyrion Lannister’s pact with the slave masters proved to be hollow and useless as the enemies began attacking the city of Meereen. Queen Daenerys Targaryen demanded some explanation over Tyrion’s decision, which he was able to defend by saying that the rebirth of the city is the cause of violence.

Daenerys wanted all the masters crucified and their soldiers killed. But Tyrion didn’t approve of it. He warned how her father, the Mad King, was killed because he ordered to burn down the King’s Landing with wildfire.

The three masters later parleyed that Daenerys and company must abandon the pyramid and their army will be sold again to the highest bidder. “Your reign is over,” said one master to Daenerys. Like the regal queen she has always been, she replied: “My reign has just begun.”

Drogon’s distracting wail was heard and the dragon came diving in, landing beside his Mother. Daenerys mounted its back and hovered around the city, with the two other dragons at her heels. The Dothraki tribe, led by Daario Naharis, rushed to put down the Sons of the Harpy while the dragons set the enemies’ ships ablaze. The masters were shaken and two of them got an instant slashing in the throat from Greyworm. The remaining one was forgiven, and it was because he lived by the grace of the Queen, as Tyrion wanted him to tell his people.

In the North, the Starks and Boltons faced each other to seal final negotiations as the war drew near. Ramsay Bolton said because he’s a man of mercy, there’s really no need for battle, telling Jon Snow, “Get off your horse and kneel.” Jon also didn’t wish to sacrifice the lives of his men so he dared Ramsay on a one-on-one combat. But Ramsay was unwilling and reminded them that Rickon Stark’s life is at stake.  “You’re going to die tomorrow, Lord Bolton. Sleep well,” Sansa Stark said, after Shaggydog’s head was thrown before them.

The night before D-day, Jon and company went over their battle strategies. Sansa was angry that she was kept out of loop in making plans. She knew what’s on Ramsay’s mind and warned Jon not to fall into his traps. She knew too that Rickon, a legitimate heir to Winterfell, is the greatest threat to Ramsay, and the boy is already marked dead. Jon and the whole crew couldn’t back down now but he promised to protect Sansa. “No one can protect me,” Sansa replied, “no one can protect anyone.”

Melisandre and Jon shared a small talk where he asked the priestess not to bring him back if he died fighting. “I’m not your servant Jon Snow. I serve the Lord of Light. I do what he commands,” she argued. She tried to justify his resurrection by giving Jon possible, significant reasons why the Lord of Light reanimated him.

Ser Davos Seaworth was out having his “thinking walk” when he chanced upon the site where Shireen Baratheon was burned to death. The girl was the one who taught him how to read and who he considered as his best friend.

Back to Meereen, Yara and Theon Greyjoy presented themselves before Tyrion and Daenerys. All Tyrion remembered were Theon’s “height” jokes and his betrayal against the Starks. But the past didn’t concern Daenerys. She was more interested with the proposal made by Yara: Daenerys will support Yara’s claim to Salt Throne and will help them murder their uncle Euron. In exchange, Yara will support Daenery’s claim to Seven Kingdoms and the Ironborns will respect the integrity of the lands by giving up their mischievous way of life.

And it’s time for the Snowbowl in Westeros. The smell of the looming battle lingered in the atmosphere as the Starks army, including the wildlings and few men from the royal houses, lined up in the field opposite the Boltons. Ramsay took the front line, dragging his hostage Rickon with a rope tied around his hands, which he later snapped with his blade.

“You like games, little man? Let’s play a game,” Ramsay told Rickon, as he made the boy run to his brother Jon across the field. Rickon began scampering, while Ramsay drew his bow and released the first arrow directed to his target. It missed. Jon was already on his horse, riding at full speed in an attempt to meet Rickon halfway and save him.  Second arrow, then the third; both missed. Just as Jon was about to reach for Rickon, the fourth arrow pierced through the boy’s body.

Jon took a close look of his dying brother before lunging toward his foes. The Bolton men unleashed their first arrows that got Jon off his horse. Both sides began their assault, while Jon was caught in the middle, swinging his sword left and right and slashing every enemy within his reach. While Bolton arrows continued to hit everywhere, the scene of carnage turned muddy and bloody, with horses falling down and dead bodies piling up.

A phalanx of Bolton soldiers completely surrounded Jon and what remained of his scanty squad. The raucous combat continued, with Jon getting caught in a stampede, Tormund Gianstbane receiving some serious beating, the giant Wun Wun pulling several arrows off his body and Davos thinking of the dark future.

Out of the blue, Ramsay saw a waving flag bearing the sigil of House Arryn. Lord Petyr “Littlefinger” Baelish and Sansa watched from a distance as the knights of the Vale swarmed the battleground and quashed the Boltons’ defense.

Wun Wun had to destroy the gates of the Winterfell when Ramsay retreated into the castle. The giant sustained multiple arrow wounds in the process and was hit in the eye as the final death blow from Ramsay.

Jon fended off Ramsay’s arrows until he was able to inch closer and knocked Ramsay down with his shield. He then discharged a flurry of heavy punches that left Ramsay’s face bloodied and bruised. But he didn’t want to finish him off right away because he saw Sansa watching them and realized she should do the honor.

The Stark banner was rolled down in the castle as the sign of victory, but anguish still gripped the place. Davos gave Melisandre an accusing stare, while Jon wished to bury Rickon in the crypts next to their father Ned. Sansa wanted retribution so he visited Ramsay who was bound to a chair inside the kennel where he keeps his starving hounds. Sansa later uttered her farewell message to Ramsay: “Your words will disappear. Your House will disappear. Your name will disappear. All memory of you will disappear.”  When the dogs walked out of their cages, Sansa looked on while one quickly zeroed in to devour Ramsay’s face, until the other dogs joined to tear his body apart.