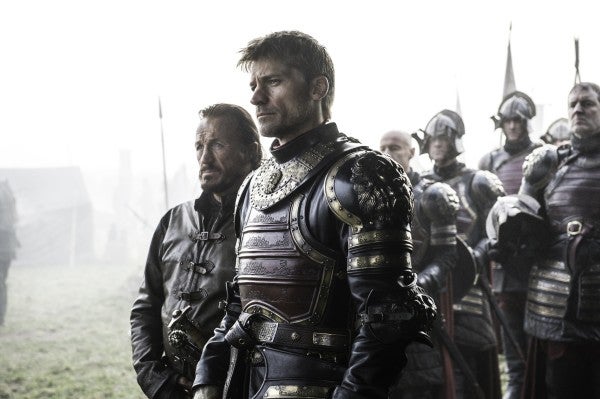 “The Broken Man” episode is nothing but surprising and filled with significant developments.

The opening credits didn’t appear first because the series has something for people to rave about right from the beginning: Sandor “The Hound” Clegane is alive!

Apparently, Sandor was able to evade his imminent demise as he was last seen dying somewhere in the Vale after his combat with Brienne. He is fortunate enough to be saved by a septon named Ray who leads a horde of villagers. Armed not with a sword but an axe, his new role is to chop some woods.

The septon, who claimed he doesn’t know any gods, believes there’s a reason why Sandor survived. There’s something bigger than the humankind, he said, and whatever it is, “he” has plans for the survivor.

Wearing a new religion on her sleeves, Queen Margaery Tyrell now enjoys learning the sacred texts of the Faith of the Seven, with the High Sparrow as her guide. She may have already atoned for her sins, but her grandmother Olenna has not yet and must be converted, as the High Sparrow suggested.

The faith leader was also worried about the Queen who hasn’t done her duty to give the King a child. They need an heir to make the crown and faith partnership prosper, he reminded.

To save Olenna from danger, Margaery wants her grandmother to go home in the High Garden, find comfort in prayer and do good works. The Queen of Thorns accepted the decision. Queen Mother Cersei is not happy about it though, for she would no longer have an ally to fight her enemies in King’s Landing. But Olenna doesn’t consider her as a friend, deriding and blaming her for the all the problems they now face.

Some wildlings were indecisive to give their full support to Jon Snow and Tormund Giantsbane was there to lift their spirits up. They need to beat their enemies, as Jon said, for the survival of their race.  They also need a much larger army to accomplish their mission.

So Jon, with Ser Davos and Sansa by his side, sought the assistance of Lyanna Mormont, the ruler of House Mormont in the Bear Island. The 10-year-old queen disliked the group’s request. She doesn’t want to sacrifice the lives of her men for someone else’s war. But Ser Davos was quite eloquent to explain that the true war is between the living and the dead (the White Walkers). The girl was quite convinced and could only lend 62 fighting men.

If the Starks aced House Mormont’s help, they failed to get House Glover’s.  Robett Glover holds a grudge against the Starks after the house’s failure to back them up when the Deepwood Motte was attacked by the Ironborns. The Boltons are their saviors, so Robett could never be on Jon’s side.

The skilled sellsword Bronn is back, with Jaime tagging him along and the Lannister army to Riverrun to take command of the siege against Brynden “Blackfish” Tully. Jaime looked dismayed at the incompetence of the Freys, who threatens to execute their hostage Edmure Tully, if the Blackfish doesn’t give up the castle.

The gate of the castle was opened for Jaime who tried to negotiate with the Blackfish. Yield the castle or blood will shed, as Jaime bargained. The Blackfish remained undaunted, saying the war is not over as long as he’s standing. His men are prepared for battle. They won’t starve with two years’ worth of provisions, which Jaime’s army does not have.

Yara and Theon Greyjoy, who rebelled against their uncle Euron and stole their house’s best ships, stopped by the Free City of Volantis. Theon was acting like a weakling and Yara prodded him to man up now that they are headed to Meereen to ask for Daenerys Targaryen’s allegiance.

In Braavos, Arya is planning to go back to Westeros after turning away from the Faceless Men. However, she has to be killed first, as Jaqen H’gar ordered. So the Waif disguised as an old woman, and greeted the girl on a bridge. She attacked Arya from behind and stabbed her repeatedly in the gut. Arya quickly jumped off the bridge into the river to get away from the assassin. She is still alive but severely wounded. She wandered the streets of Braavos, with blood oozing from her torso, looking like a stranger who badly needed help.

Ray was sharing the story of his life to his brothers and sisters in their camp when the three men from Brothers Without Banners arrived. The trio was hoping to obtain the villagers’ valuable possessions but decided to leave once they didn’t get any.

Later on, Sandor found the villagers murdered in the clearing, while Ray was hanged from the truss of the structure they were building. Enraged, Sandor picked up his axe and went away, looking like a rabid animal excited to kill someone again. RAM