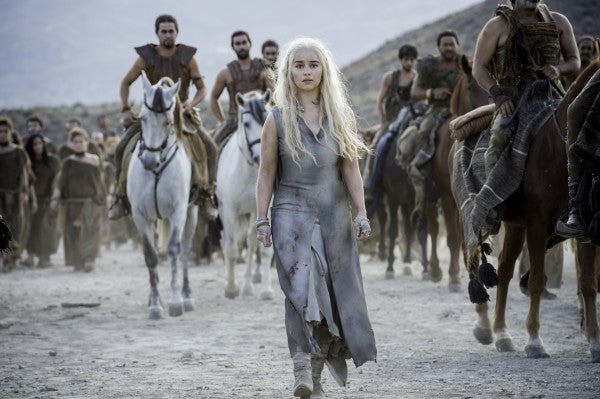 The last episode shook us to our very marrow as we gushed with happiness over the reanimation of the Lord Commander Jon Snow. It continued, in the opening scene of the season’s third installment.

But high spirits were subdued due to Jon’s unhappiness over the fact that he’s alive again. “I shouldn’t be here,” he told the bewildered Ser Davos Seaworth.

Jon was nowhere and saw nothing after he died, as he said to Melisandre, who was quick to declare, “The Lord (of Light) let you come back for a reason. Stannis was not the prince who was promised but someone has to be.”

Finding a reason why he breathes life again after his failure as a leader, Jon was convinced by Davos to fight anew and stand up for what is right. Before long, he was already in a night’s watch robe and was greeted with welcoming jests from his friends Edd Tollett and wildling leader Tormund Giantsbane.

Aboard a ship, Samwell Tarly was feeling sick as he and Gilly were on their way to Old Town. Sam doesn’t want to take Gilly and their son Sam in the Old Town to secure their safety. He wants her instead to stay in his home at Horn Hill with his mother.

It is always exciting to see the unspooling of mysteries from the history through the help of Bran and the Three-eyed Raven. They immersed in the past, as they did before, to witness the showdown at the Red Mountains between the Targaryen loyalist Arthur Dayne and  Bran’s father Eddard “Ned” Stark.

Ned came to rescue his sister Lynna, who was abducted by Prince Rhaegar Targaryen and was kept at the Tower of Joy, guarded by Arthur and his ally Ser Gerold Hightower.

Arthur, a seasoned swordsman, took down Ned’s men effortlessly until he was stabbed at the back by Howland Reed (Meera’s father). Ned, in turn, sliced through Arthur’s chest to guarantee his death.

Bran got mad when the Raven cut short his visions just as he was about to follow his father inside the tower. The Raven warned again that Bran might never be able to return if he stays too long in his visions. Bran is not leaving the cave, until he learns everything, as the Raven said.

In Vaes Dothrak, Khal Moro and his khalasar brought Daenerys Targaryen to the Temple of Dosh Khaleen. Daenerys met the High Priestess of the Dosh Khaleen who told her that she has to stay with them and learn their ways.

Varys the Spider never gets old in performing his wiles as he spoke with a woman named Vala who conspired with the Sons of Harpy to murder the members of the Unsullied and Second Sons.  He managed to emotionally blackmail Vala and offered her and her son a new life in exchange for all the information that she knows.

When Tyrion blurts out jokes, things don’t get boring. But this time in Meereen, he was moping in boredom, trying hard to strike a conversation with Greyworm and Missandei. He urged them to play a “drinking game”, when Varys arrived with an intelligence report that the masters of Astapor and Yunkai are the ones funding the Sons of the Harpy with help from their allies in Volantis. “So we will fight them?” Greyworm asked. “Possibly,” Tyrion replied.

Former maester Qyburn was taking over as the Master of Whisperers as he bribed children with candied plums and turned them into his own “little birds” or spies. Queen Mother Cersei Lannister wants to deploy little birds everywhere so she may know what her enemies think and plan. “Let’s topple the city,” she said. Her brother-lover Jaime, meanwhile, wants the High Sparrow dead.

Cersei’s attempt to seize control of things in King’s Landing apparently loses its bite as she was prevented to take part in the small council meeting. Jaime also wanted a position, too, but was also denied. Except for Grand Maester Pycelle, the other council members stood their ground. Olenna Tyrell taunted Cersei, while his son Mace and Kevan Lannister walked out the room.

King Tommen, meanwhile, is now even more strong-willed to assert his power. He met with the High Sparrow, demanding that his mother Cersei be given the chance to see Myrcella’s resting place. The High Sparrow refused, saying that Cersei must first be fully atoned for her sins.

The King, who was fuming as he defended his mother, was later pacified. The High Sparrow, through his gentle words, tried to explain to the King the reason behind the actions of the Faith of the Seven and its militants against Cersei.

At the House of Black and White in Braavos, Arya looked to be enjoying the agony which the Waif was inflicting upon her. During the Faceless Man training, the scenes alternately cut from the Waif beating Arya to Arya giving honest answers during the Waif’s interrogation. And it’s good because, Arya is improving a lot as she strives to be “no one.”

Jaqen H’ghar later offered the blind girl a drink. But she felt afraid of his intention. “If the girl is truly no one, she has nothing to fear,” Jaqen assured.  Arya drank the water, and when she opened her eyes, she is no longer blind.

At the Winterfell, Ramsay Bolton received a precious gift from Smalljon Umber: the wildling Osha, her companion Rickon Stark and Shaggydog’s head. Smalljon sought Ramsay’s help to defend the south of the Wall from the wildlings.

The show at the Castle Black was capped off by Jon executing by hanging the traitors Allison Thorne, Othell Yarwyck, Bowen Marsh and Olly. He then handed over his black cloak to Edd, leaving him in charge of the Night’s Watch. Jon, the oathbreaker, left the courtyard, telling his friends “My watch has ended.” IDL