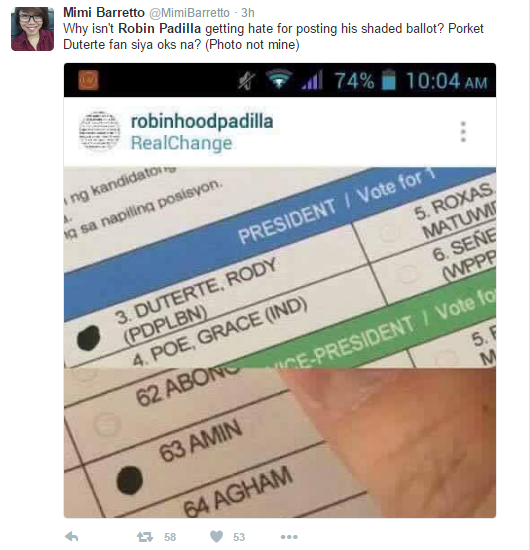 Actor Robin Padilla drew flak on social media after supposedly posting a picture of his shaded ballot on election day.

Padilla took to Instagram to share a photo of his ballot, showing his vote for Davao City Mayor Rodrigo Duterte for President and AMIN for party-list.

Padilla’s post has been deleted from his account but netizens were able to take screenshots of it.

Earlier in the day, Padilla’s nephew Daniel Padilla and onscreen partner Kathryn Bernardo also drew flak for having their photos taken with their seemingly unaccomplished ballots inside the polling precinct.

In a post on Twitter, Commission on Elections spokesperson James Jimenez said he needed to speak to the love team, who are supporting the candidacy of administration candidates Mar Roxas and Leni Robredo.

INQUIRER.net has sought the side of Padilla on the matter, but he is yet to respond. YG/rga