kathryn and daniel and i need to talk #PiliPinas

The Commission on Elections (Comelec) and a poll watchdog hit TV and movie stars Kathryn Bernardo and Daniel Padilla for having their photos taken with their ballots while inside their election precincts.

Photos of the reel couple circulated online and have drawn flak from netizens.

Comelec spokesperson James Jimenez, in a tweet, said that he needs to “talk” with the two celebrities—both of whom support administration bets Manuel “Mar” Roxas II and Ma. Leonor “Leni” Robredo for the presidency and vice presidency.

“Kathryn and daniel and i need to talk #PiliPinas” Jimenez said.

His tweet has been retweeted more than 4,800 times and was marked as favorite by more than 6,000 users as of this writing.

The Legal Network for Truthful Elections (Lente) said that the act of the two celebrities can be deemed illegal as it violates the Omnibus Election Code.

“Sec. 195 of the Omnibus Election Code provides that it is unlawful to exhibit the contents of the ballot to any person,” Lente said.

The Comelec has banned the use of cellphones and recording devices inside polling precincts. 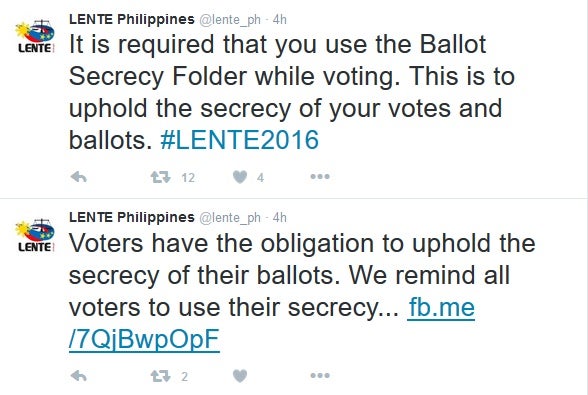 Section 20 of Comelec Resolution No. 10088 states that the use of cellphones or any recording devices is not allowed inside the polling place.

“Use of capturing devices, including, but not limited to, digital cameras, or cellular phones for whatever purpose while inside the polling place,” the resolution read.

“Voters have the obligation to uphold the secrecy of their ballots. We remind all voters to use their secrecy folders and to refrain from exhibiting their ballots,” Lente said. CDG/rga

Read Next
JaDine love story still unbelievable to many
EDITORS' PICK
Kalinga, Ifugao, Mt. Province, N. Samar will be under Alert Level 4 from Jan 21-31
Mobile COVID-19 vaccination for commuters, transport workers set at PITX
31,173 new COVID-19 cases push PH’s active tally to 275,364
Municipal court in Pangasinan sets arraignment for ‘Lolo Narding’
Acer starts the year off strong with the Aspire Vero National Geographic Edition
Gear up and get ready to play with Yamaha Mio Gear
MOST READ
Imelda Marcos trends on Twitter after octogenarian jailed for allegedly stealing mangoes
SSS: Members on home quarantine due to COVID-19 can apply for sickness benefit
Villar backs implementation of EDSA decongestion blueprint
Help pours in for octogenarian jailed for ‘stealing’ mangoes in Pangasinan
Don't miss out on the latest news and information.