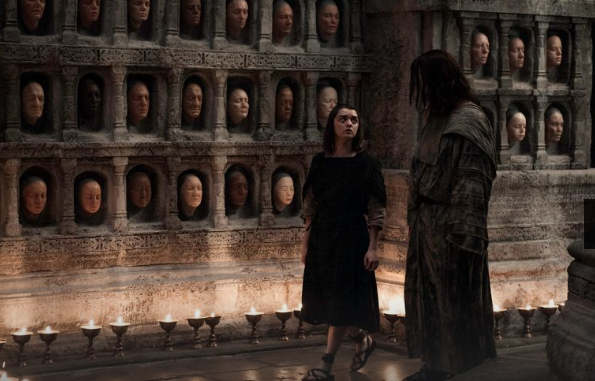 A girl was able to pull through after getting away from the jaws of death exacted by her assassin. The “No One” episode had the rest of her story.

The theater actress Lady Crane heeded Arya Stark’s advice and gave a heartfelt performance as Cersei Lannister in the square at the city of Bravoos. When she was done with her part, she went backstage and saw the bloodied Arya. She immediately tended her wounds.

When the little girl was feeling well enough to speak, Lady Crane talked to her and invited her to come along with her crew in Pentos. Arya declined the offer, saying she wanted to go to the edge of the world.

Now that Sandor “the Hound” Clegane is back in the saddle as a mad dog, he prowled the forest and found the killers of his friends. Swinging his axe, he slashed the four rogue members of Brothers Without Banners.

The city of Meereen has come back to life as a Red Prietess from Volantis coaxed the people about the Lord of Light and Daenerys Targaryen as their savior. Tyrion Lannister bade goodbye to Varys who will be coming back to Westeros on a covert mission. They needed friends and ships, he told Tyrion.

At the King’s Landing, the Faith Militants walked in the Red Keep to fetch Queen Mother Cersei Lannister, who was ordered to have a word with High Sparrow at the Sept Baelor. When Cersei didn’t budge and chose violence as Lancel provoked, Ser Robert Strong aka the Mountain, using his enormous hands, tore the head of one of the militants. The intruders were taken aback and filed out the room in fear.

Brienne of Tarth and the squire Podrick Payne arrived at the Riverrun with the task of gaining support of the Tullys against the Boltons. While Podrick was goofing around with his old friend Bronn, Brienne got reunited with her former traveling companion Jaime Lannister. The two had a parley, although both were positioned on the opposite side of the battlefield.

Brienne explained her purpose and proposed negotiating with Brynden “the Blackfish” Tully to vacate the Riverrun and in exchange will be granted safe passage to the North to unite with the Starks. She later faced the Blackfish and insisted on having him read Sansa’s letter. The Blackfish rejected the message, saying he couldn’t help Sansa and wouldn’t leave his home.

In the Throne room, King Tommen announced before his people that her mother Cersei and brother-in-law Loras Tyrell would have to stand trial by the seven septons on the first day of the festival of the Mother. A trial by combat will be forbidden from then on, which put Cersei at a disadvantage.

Tyrion, Greyworm and Missandei made a toast for their Queen and the stable Meereen when they found out about the fleet of the slave masters approaching the bay, ready to wreak havoc in the city and recover their properties.

Jaime was trying to be friendly when he talked to the captive Edmure Tully, whom Jaime promised to have a better life if he would succeed in persuading his uncle the Blackfish to give up Riverrun.  Edmure just gave him a rebuff and the two men ended up sneering at each other and arguing about their sisters. Jaime said he would do everything for Cersei even if it means slaughtering every member of the House Tully.

While Tyrion and company were scrambling to figure out their next move in light of the attacks, they were suddenly stirred by the arrival of Drogon and their Queen Daenerys.

The night fell and Edmure demanded entry into the castle. The Blackfish argued with another Tully man that his nephew is a trap, to which the man disagreed, saying that Edmure must be obeyed for he is the rightful Lord of Riverrun.

Edmure later took charge of the castle and led the Tully forces in surrender to the Lannister army, sparing both camps a bloodshed. Brienne, who was set to leave the premises by boat, urged the Blackfish to come along with her and Podrick to the North. However, the Blackfish chose to fight his enemies until his death.

Sandor came across a small group of Brothers Without Banners led by  Beric Dondarrion and Thoros of Myr, who were about to punish the trio who were the brains behind the murders of the villagers. Sandor insisted of killing them all with his axe, but Beric maintained  they must be killed by hanging. Sandor got his fair share of justice and sent two of the brothers to their death. Beric aftewards offered Sandor to join the clan.

Back in Bravoos, Lady Crane was getting a medicine for Arya when she was killed by the Waif, who disguised as a man. Arya swiftly ran away. A cat-and-mouth chase through the city ensued, until both girls blindly fought each other inside an unlit hiding spot.

Jaqen H’gar later discovered that the Waif’s face was added to the Hall of Faces. When he turned around, he saw Arya and commended her for finally being a “No One.” The little girl seemed displeased, saying she was Arya Stark from Winterfell and said she was going home. Jaqen just smiled and nodded in approval before the girl departed the hall. RAM

Casimero: Inoue not a ‘Monster’ but a ‘Turtle’