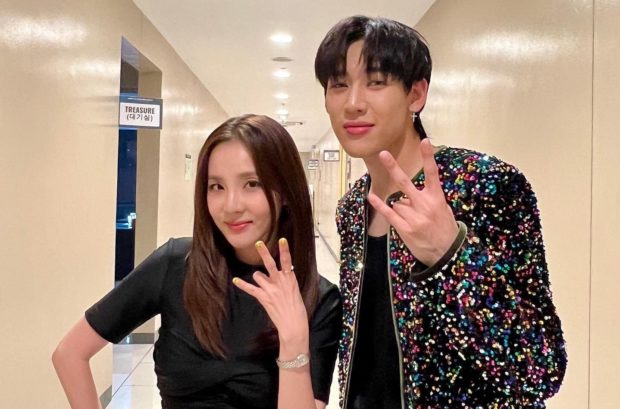 Sandara Park got to take the stage with her labelmate and “brother” BamBam of the K-pop group GOT7 during the latter’s “K-Pop Masterz in Manila” concert.

Park, who was only at the event as a concertgoer, appeared onstage with BamBam at the show held at SM Mall of Asia Arena, as seen on the venue’s Facebook page yesterday, July 29.

BamBam called Park to the stage and they sang “I Don’t Care” by her former girl group 2NE1, based on Twitter posts by fans who attended the concert.

Park explained that she was not part of the lineup for the concert and only came to the event to support BamBam, as per her Twitter posts, also yesterday.

“What a totally unexpected day today! Came here to support my dear brother [BamBam] and I ended up performing onstage,” she said.

Park then joked about her unpreparedness to appear onstage, noting that she just brought beachwear for her trip to the Philippines.

(Actually, I am not a special guest in the show. Came here just to support and just watch. That is why I did not bring clothes for the stage, I only brought beachwear.)

Park arrived in the Philippines last Wednesday, July 27, after two years of not being in the country. Back in December 2021, she said that her Christmas wish was to return and perform for her Filipino fans.

Park, who gained fame in the Philippines through “Star Circle Quest,” stays true to her Filipino roots and has proven so in several instances. She spoke the Filipino language when she ordered food from a Filipino server and even recommended local food to BamBam when he was recently in Cebu.

Both Park and BamBam are handled by the South Korean record label ABYSS Company. BamBam became part of the agency in March 2021, while Park signed with it in September last year.  /ra

LOOK: Sandara Park is back in the Philippines