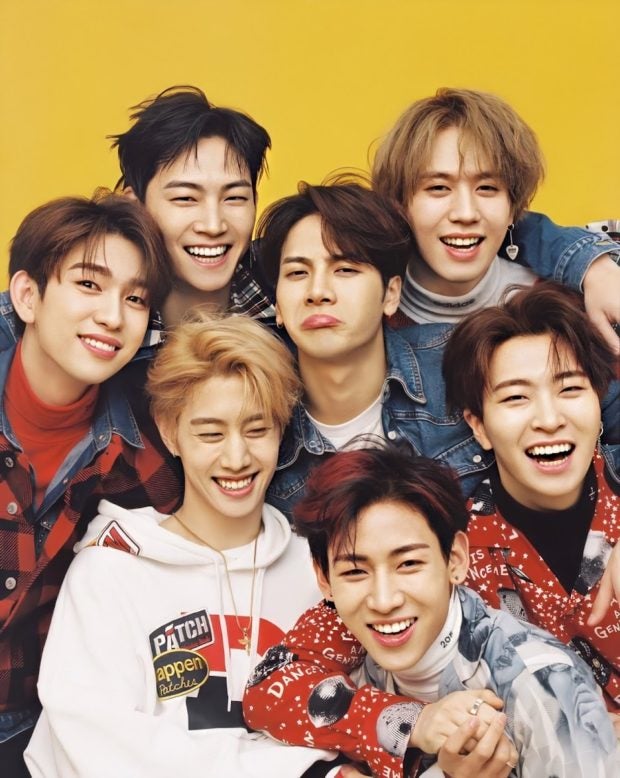 Truly in it for the long ride.

Ahgases, the group’s fans, flooded social media with warm wishes, photos and fancams of the septet, along with the hashtag #GOT7_FOR8VER, which has topped online trends, with 1.2 million tweets as of writing.

In anticipation of their eighth year in the Korean entertainment industry, all GOT7 members reunited via Instagram Live on Saturday night, where they poked fun at each other like old times, gave life updates to their fans, and talked about their plans for the future.

GOT7’s Jinyoung expressed his gratitude to their fans for consistently supporting them throughout the years, as he promised that the group will definitely come out with another album.

“While we’re doing many solo activities, there was a gap too, but to Ahgases who have been waiting for us, I’m so thankful for you. I’m also very thankful to our members who are doing very well,” Jinyoung said in Korean. “Although we don’t know when we will be back again, we’ll be sure to come back with an album that our Ahgases will love.”

“We are more [than a] fandom. We are family,” Bambam said.

We are more then Fandom
We are Family🐥 pic.twitter.com/cSu8sH9rL2

A year of freedom

Just days ago, GOT7 marked one year since the announcement of its departure from JYP Entertainment, the septet’s home for seven years. The news quickly dominated social media as the members shared the same group photo along with the hashtag #GOT7FOREVER.

Staying true to their “seven or never” mantra, all members decided to leave in unison, with the promise to stay as a group and make time for their reunion despite signing with different labels.

SEVEN OR NOTHING.#OnThisDay a year ago, Korean news outlets reported that esteemed South Korean group GOT7 had decided to leave JYP Entertainment after seven years with the company. | @denverINQ

A month after their exit from JYP Entertainment, GOT7 dropped the sentimental track “ENCORE” – currently the group’s last project together – along with a music video that expressed their love for their fans and gave life to their most cherished memories together.

In a short message in the music video, leader JAY B reassured Ahgases that “we’re here to keep that promise,” perhaps to dispel any kind of rumor about the group’s status. The members, who are currently busy with their respective individual careers, have repeatedly stated that they did not disband.

Mark: You are surprised, right?
PH Ahgases: OH YOU BET WE ARE

Filipino fans are still recovering after finding out that they made a special cameo on GOT7's "ENCORE" MV, which included clips from the group's last concert (held in Manila). | @denverINQhttps://t.co/p7TLVNNSuB pic.twitter.com/iBiYUe9Kcf

GOT7 made its official music program debut on Jan. 16, 2014, performing the single “Girls, Girls, Girls” from its first extended play “Got It?” which was released four days later. The group later produced four studio albums, with “Breath of Love: Last Piece” being the most recent.

Known for its individuality and constant reinvention with every musical effort, GOT7 maintains a strong and diverse discography with various hits such as “Just Right,” “If You Do,” “Hard Carry,” “Lullaby” and “You Calling My Name.”

The septet has clinched multiple awards, including the Disc Bonsang (main prize) at the esteemed Golden Disc Awards, which they secured for five consecutive years, starting in 2017.

With a strong global fanbase, GOT7 has gone on to stage three major world tours, with the sold-out Manila stop of the “Keep Spinning World Tour” in October 2019 being their last concert for the meantime. Clips from this show were included in the group’s “ENCORE” music video. JB

‘We’re back again!’: GOT7 honors promise to fans with sentimental ‘ENCORE’ MV