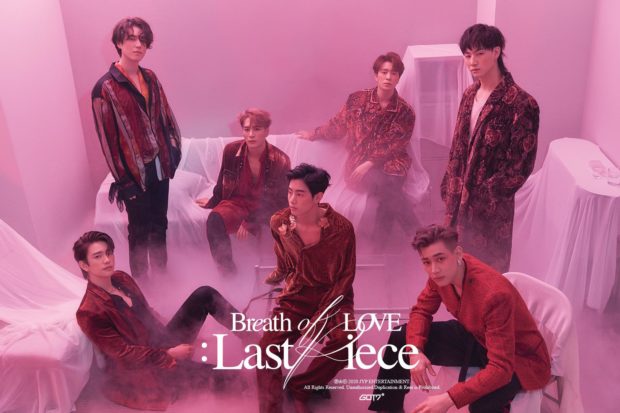 GOT7’s take on love is both pronounced and unassuming in their latest full-length offering, Breath of Love: Last Piece, released on Nov. 30.

Love manifests in different ways. It can be an unwavering guarantee, a reason for one’s existence, as much as it can be an act of taking responsibility and making things right. Sometimes, it’s riding the waves of uncertainty and holding on to memories, good and bad.

GOT7’s take on love is similarly multi-layered, both pronounced and unassuming in their latest full-length offering, “Breath of Love: Last Piece,” released on Nov. 30. After the commercial success of their extended play (EP) “Dye” last April, the South Korean boy group announced in early November the release of their long-awaited fourth studio album, its latest since 2018.

Two of the tracks, “Breath” and “Last Piece,” make it clear that this album is dedicated to the people that matter to them most: the IGot7 fandom. Youngjae confirmed he wrote the pre-release single “Breath” for their fans in the group’s Dec. 2 guesting on “Weekly Idol.”

In “Breath,” the soft synths and subdued verses serve as backdrop for the song’s signature whistle-infused hook. There’s a certain calm when Yugyeom sings, “breathe in, breathe out, you and me now,” as if he’s preparing you for the beat drop right at the catchy chorus. Youngjae and JB’s powerful vocals perfectly complement the other members’ softer parts, making up the song’s distinct texture.

“Last Piece,” on the other hand, is both subtle and explosive. Co-written by leader JB (under his composer name DEFSOUL), the second title track is refreshingly understated. The verse starts off easy as the mid-tempo beat and hazy instrumentals are slowly established; the rhythmic consistency of the song make it sound more refined and cohesive. The chorus, too, is surprisingly held back, highlighting the post-chorus hook as Mark and Jackson tell listeners that they’re the “missing last piece.”

GOT7 lives up to the expected quality of their album’s supporting tracks. The septet truly has a penchant for creating B-sides that, sometimes, even surpass the success of their lead singles. “Thank You, Sorry,” for instance, is a true standout. The soft, sentimental song primarily penned by maknae Yugyeom is delicately reminiscent of JJ Project’s melancholic mini-album “Verse 2.” Jinyoung, the sub-unit’s other half, shines in the track: the soft rock and R&B influences of the song are totally right up Jinyoung’s alley, with the laid back electric guitar and keyboard accompaniment allowing his vocals to take center stage.

One of the best aspects of the album is its showcasing of all the members’ vocal abilities. While the group’s vocalists deliver as expected, hearing GOT7’s rap line of Mark, Jackson and Bambam throughout the 30-minute record is a pleasant development. The trio proves they can keep up vocally with the rest of the group, especially in the tracks “Wave” and “Waiting For You.” Both songs are also notable B-sides, distinct for their wistful melodic progressions, built upon distorted auto-tuned echoes and trap-influenced beats.

Compared to their last full-length record “Present: You,” this ten-track offering is undoubtedly a more polished and thought-out production, in terms of sound and lyricism. While their previous album lost its vision by trying too hard to cater to the global market, “Breath of Love: Last Piece” strikes a superb balance and shows their emotional maturity over time. They now know when to hold back and when to let go in their music.

There is something to be commended about GOT7’s surging confidence with every musical effort. The group made their bones crafting the introspective 2019 EP “Spinning Top: Security and Insecurity,” fleshing out their vulnerabilities and exposing their anxieties. GOT7 wasn’t afraid to embrace their darkness and it paid off big time. Breaking free from their inhibitions resulted in twenty wicked minutes of honest storytelling, a production that perhaps started the group’s ascent to an era of boldness and self-assurance. Their succeeding EPs, “Call My Name” and “Dye,” prove this.

GOT7 is just undeniably better when allowed to run wild and explore and, what makes this musical effort so laudable is the masterful approach on the subject. The group made something so repeatedly tackled feel like their own.

Meanwhile, Ahgases, their fans, have displayed unwavering support for the group. They have long been criticizing GOT7’s agency, JYP Entertainment, for their lack of — if not non-existent — effort to maximize publicity and promotion for the septet. In July alone, fans organized protest email drives and went as far as sending a truck in front of the agency’s building to demand better treatment for the group. GOT7, likewise, never fails to reciprocate the love.

Ask any avid listener and they will say the same thing: they don’t quite know what to expect from the seven-member group, and that is a good thing. GOT7 maintains a conscious effort to constantly reinvent itself while respecting each member’s individual artistries, resulting in a synergy that makes beautiful music. JB

How ‘Philadelphia,’ landmark AIDS movie, holds up in 2020