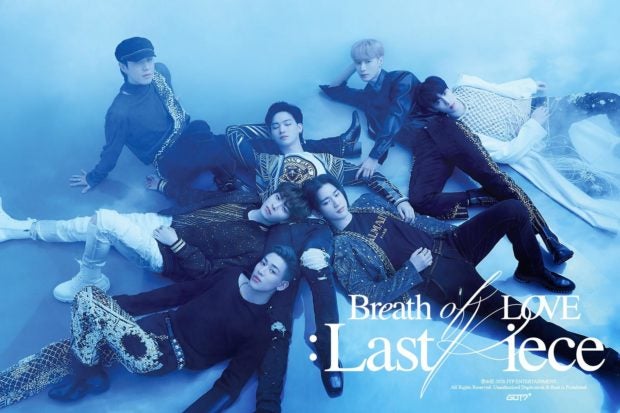 In their much-anticipated return, GOT7 delivers a love letter to the people that matter to them most.

Composed of songs mainly self-penned by the members, the 10-track album is led by its two title tracks, “Breath” and “Last Piece,” both of which are released with accompanying music videos.

The first single “Breath,” composed by Youngjae (under the name Ars), was pre-released on Nov. 23. The hip hop track, highlighted by catchy whistling in the chorus, expresses the feeling of being overwhelmed by love.

Meanwhile, “Last Piece,” written by leader JB (under his composer name Defsoul), was released today along with the album. Infused with strong vocals and distinct rap lines characteristic of the group, the second single features a music video that serves as a continuation to “Breath.”

The album also contains notable B-side tracks, including the trap-influenced “Special” and the JJ Project-reminiscent “Thank You, Sorry.”

The group held a Twitter Blueroom ahead of the album release to answer questions and update their fans on their personal lives.

GOT7 already found early success this year with their 11th extended play “Dye” released last April, with its lead single “Not By The Moon.”

“Breath of Love: Last Piece” is the group’s latest full album since their 2018 release of “Present: You,” which included the upbeat, house-influenced single “Lullaby.” JB