Could there still be a chance for peace between Kris Aquino and her former project manager Nicko Falcis? 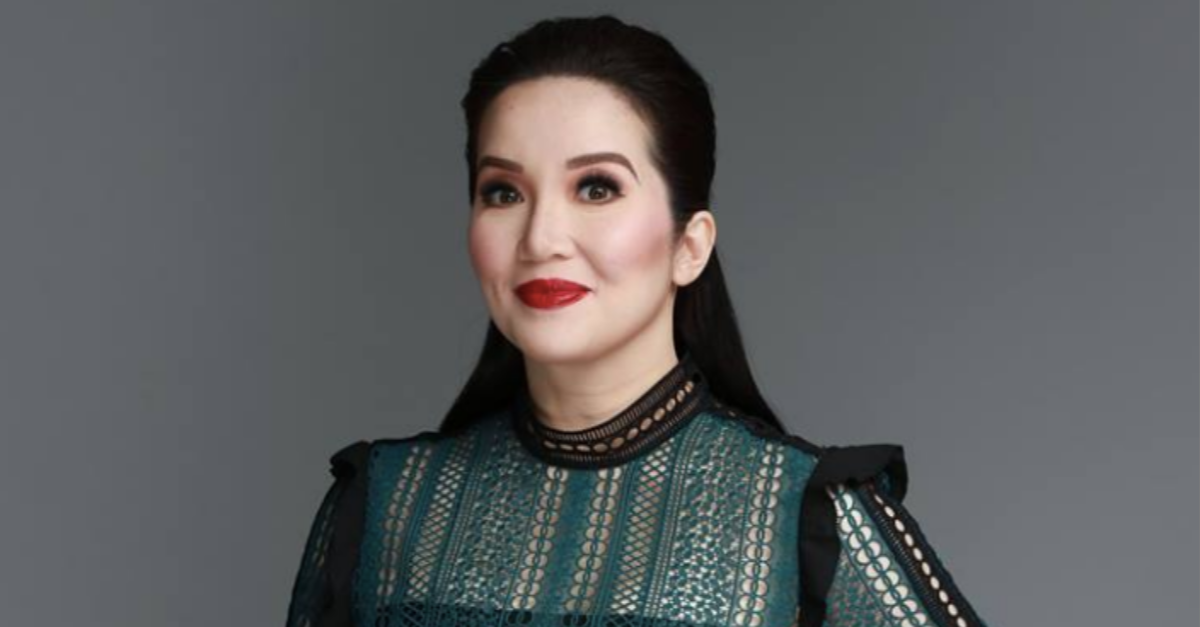 After Aquino announced the dismissal of grave threat complaints against her on Instagram on Friday, April 26, Nicko Falcis defended his side in the comments, stating that he and his family had sought a meeting with Aquino, which was allegedly ignored.

“Our family continues to pray for peace and justice. We both told our truths as the cases get dismissed one after the other since we both want to protect our families,” he said.

Aquino said the situation personally affected her and her son Bimby, stressing that “[h]e’d been through hell…” She added “despite your mom being a doctor — nagtrip kayo sa mga karamdaman ko (you mocked my ailments).”

Aquino noted that it was Falcis’ party that did not attend a mediation, and offered to meet with him.

“We can meet at a neutral location with your lawyers and mine. We can talk like civilized individuals — let’s not involve our siblings,” she said.

Falcis disputed her claim on attending a mediation. “Our family kept asking for a meeting to fix all of this, unfortunately it fell on deaf ears.”

“My mother has never been [so] deeply shamed,” he said. “I did my best as your agent, following all your commands in sealing all the branded deals and investments… 26 Sundays later, my prayers continue.”

He said he never harmed Aquino’s sons. “I love Bimb and Kuya [Josh] and I’ve shown respect and care for them all throughout our experiences — good and bad po.”

“Nicko can you please not lie to the people?” replied Aquino. She said a mediation was scheduled on Oct. 30, 2018, but that he “refused to sign a special power of attorney to authorize your mom or your Ate to sign whatever settlement we could agree upon.”

“The saddest part about this whole chapter, the ones we love most suffered the most,” she said.

When a netizen, one @franzrei, asked if money was stolen, she said there was, but that the issue could have been resolved had there not been personal attacks against her illnesses. 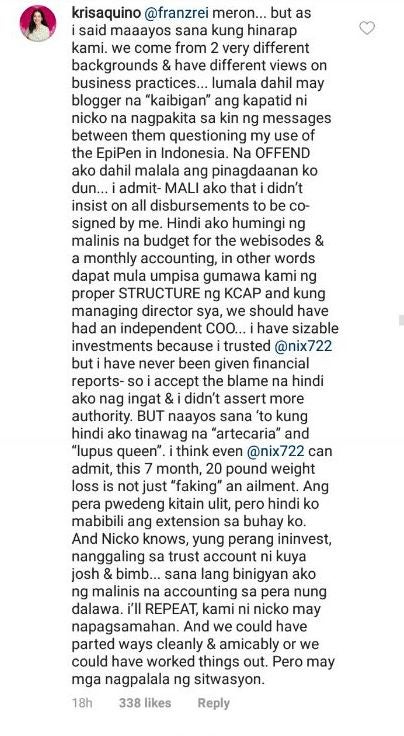 She noted too that there were lapses in how she trusted Falcis with money matters, stating that she did not ask to co-sign disbursements and did not request a monthly accounting of expenses.

“I have sizable investments because I trusted @nix722 but I have never been given financial reports — so I accept the blame na hindi ako nag-ingat (that I did not take precautions) and I didn’t assert more authority,” she said.

(This could have been resolved if I were not called “artecaria” and “lupus queen”… Money can be earned again, but I cannot pay for my life to be extended.)

“We could have worked things out. Pero may nagpalala ng sitwayson (But something made the situation worse),” she said.

In January, an audio recording of Aquino circulated in which she was heard saying that her family would kill him or have him imprisoned. The threats were made via a long distance phone call in September 2018, which led to Falcis filing a complaint against Aquino.

After Aquino filed qualified theft charges against Falcis, his siblings, sister Charlene and brother Jesus, came to their brother’s defense, stating that her charges were “baseless.”

Last November, Aquino filed a cyberlibel case against Jesus Falcis for stating that she painted herself as a victim and “mocking” her “urticaria-prone skin” “in such a way as to ridicule and humiliate me.”

Two of Aquino’s qualified theft cases against Falcis were dismissed in February, while the Taguig City Prosecutor found probable cause to charge him with estafa and ordered his arrest in March. Aquino withdrew two of the cases that she filed in other cities.  /ra

Nicko Falcis’ mom to Kris Aquino: ‘You started with lies, we’ll end it with truths’