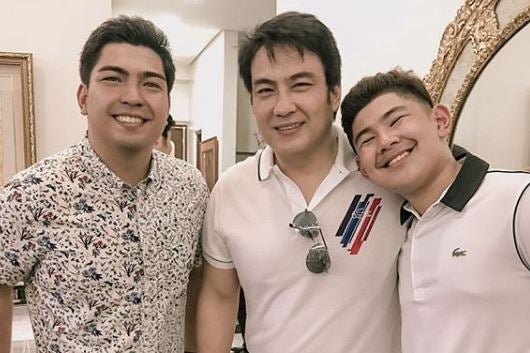 Jolo with dad Bong and son Jose Gabriel last December 2017 after Bong was granted a 10-hour furlough by Sandiganbayan for the holidays.  Image: Instagram/@jolorevilla

Jolo Revilla took to social media to mark the 52nd birthday of his dad, former senator Bong Revilla Jr, who has been behind bars since 2014 after he turned himself in to the anti-graft court Sandiganbayan following charges related to his alleged involvement in the P10-billion pork barrel fund scam.

To mark his dad’s 52nd birthday today, Sept. 25, Jolo took to Instagram to share a photo of Bong wearing sunglasses and giving away relief goods.

“Papa, today marks your 5th year celebrating your birthday inside Camp Crame, and I hope it will be the last,” wrote Jolo. ”

In his message to his dad, Jolo promised to make him proud—an undertaking he’s been fulfilling both as an actor and a politician in recent times. Last month, Jolo received the Outstanding Local Legislator Award in recognition of his  work as Cavite vice governor. Meanwhile “Tres,” his action film with Rhian Ramos and Albert Martinez, opens in Philippines cinemas this coming Oct. 3.

“Thank you for the opportunity you have given us,” said Jolo. “We will make sure that you will be proud of us as we always do our best.”

Jolo also gave words of support to Bong, telling him,”Be strong, we are always here for you. We miss you and we love you. Happy birthday!”

Back in June, Bong took to Facebook to mark his fourth year in Camp Crame. Bong then lamented the years he had spent being away from his family and missing out on the milestones of his children’s lives. For Bong, these were years he “can no longer get back.”

Despite bouts of wanting to give up, however, Bong shared then that he remained hopeful and was praying for truth to prevail. “Hangad ko na sana, sa wakas, makamit ko ang hustisya (I hope to finally get justice). Let us all continue to pray together! God is good!”