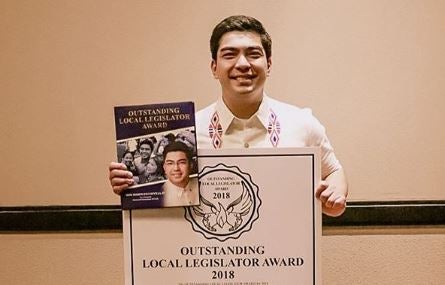 Jolo Revilla was overjoyed and humbled when he was recently named as one of the recipients of the Outstanding Local Legislator Award, a recognition presented to him by award-giving body Superbrands Marketing International Inc. this month.

Revilla became vice governor of Cavite back in 2013 and was hailed as the youngest vice governor to ever be elected in the Philippines. He continues to follow in the footsteps of his parents, former Sen. Bong Revilla Jr. and Bacoor Mayor Lani Mercado, who both first made their mark in the entertainment industry before making their foray into public service.

In the picture he posted, Revilla can be seen posing for the camera with a big smile as he showed off his award, which bore the words: “Outstanding Local Legislator Award 2018.”

“This shall serve as an affirmation of our passion and commitment to serve our province, our people and our country,” he said.

In another post made on the same day, Revilla shared a picture of a row of plaques that showed all the other recipients of the said award.

Revilla wrote, “Humbled and honored to be one of the recipients of the Outstanding Local Legislator Award, together with the best and the brightest lawmakers in the country.”

Humbled and honored to be one of the recipients of the Outstanding Local Legislator Award, together with the best and the brightest lawmakers in the country.

Apart from politics, Revilla continues to be active in the entertainment industry. Last April, he returned to acting by joining action-drama television series “Ang Probinsyano” as a special guest, starring alongside actors Coco Martin, Eddie Garcia, John Arcilla and Angel Aquino, among others.

In fact, last Aug. 24, Revilla shared a picture of him with the cast of “Ang Probinsyano.” With him were just some of the talented actors of the long-running series, such as Jhong Hilario, former Sen. Lito Lapid, Martin himself and veteran actor Garcia.