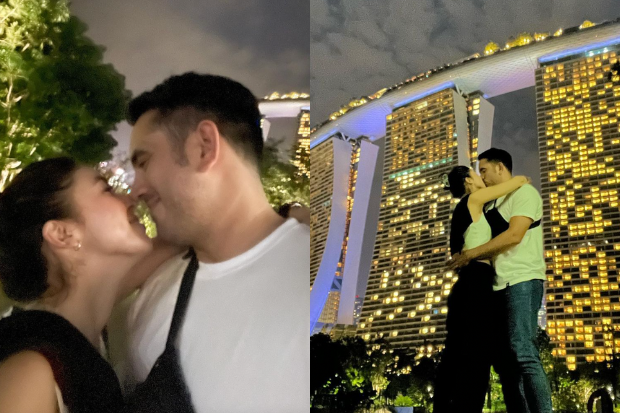 Julia Barretto and Gerald Anderson are still going strong despite split rumors, as the actress gave fans a glimpse of themselves spending quality time during their Singapore trip.

The couple can be seen embracing and kissing, with Singapore’s iconic Marina Bay Sands in the background, via Barretto’s Instagram post yesterday, Oct. 4. Barretto showed these photos as she explained her brief absence from social media to go on “vacation mode” with Anderson.

“Sorry no update the past few days, been on vacation mode and it’s been so nice to spend some quality time with RJ (Anderson). Excited to share memories collected this weekend,” she said.

The couple recently watched the F1 Grand Prix in Singapore which took place earlier this week.

This marks the first time Barretto has posted about Anderson on her Instagram page after shutting down rumors that they had broken up. These speculations came after the actor went to Switzerland with actress Kylie Padilla to film their movie together, and was rumored to be expecting a child with the actress.

Barretto has since spoken up on the issue, clarifying that she and Anderson are still a couple. She stressed that Anderson makes her “feel safe” in their relationship and she has “no reason” to doubt him.

Anderson and Padilla have also broken their silence on the matter. Anderson addressed the split rumors by saying that the public should just wait for nine months to confirm if he is indeed having a baby with Padilla, while Padilla laughed off the rumors and described her working relationship with Anderson as “super professional.”

Anderson confirmed his relationship with Barretto in March 2021 during an interview with TV host Boy Abunda.  /ra

Julia Barretto speaks up on rumored split with Gerald Anderson: ‘I feel safe in our relationship’