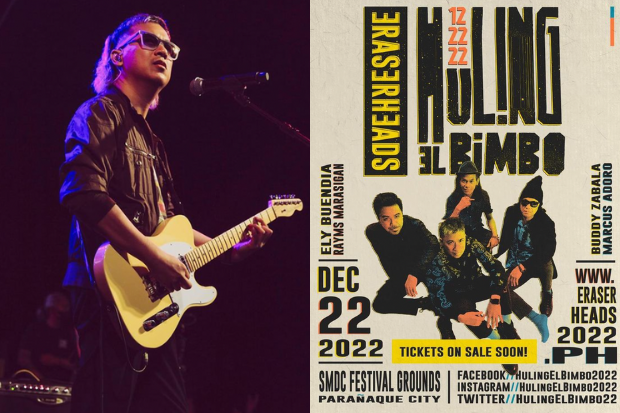 Ely Buendia broke his silence on issues surrounding Marcus Adoro’s inclusion in the upcoming Eraserheads reunion, saying that one of his conditions in performing with Adoro again was that the guitarist should “resolve his issues.”

The band vocalist spoke up on the matter via a statement sent by his manager Dianne Ventura to ANCX yesterday, Sept. 21.

“One of Ely’s non-negotiable conditions prior to signing was precisely that Marcus resolve his issues otherwise Ely would not work with him. This was promised by Marcus’ management which was why we even reconsidered,” Ventura stated.

Ventura then stressed that Buendia does not condone abuse, so calling him an “enabler” is “false and absurd.” She also noted that Buendia’s camp is seeking accountability.

“We do not condone abuse that is absolute,” she said. “We acknowledge the pain and suffering of the parties involved and we seek accountability.”

Given this, Buendia’s camp wishes to “encourage peace” and vowed not to “get in the way” of any possible reconciliation between the concerned parties.

“We are hoping for good to come out of this,” Ventura added.

Meanwhile, Eraserheads drummer Raymund Marasigan expressed hope that the issue involving Adoro would be resolved soon, and said he would have wanted to talk to Adoro privately on the matter.

It can be recalled that back in 2019, Adoro’s former partner, actress Barbara Ruaro, and their daughter, singer Syd Hartha, accused the Eraserheads guitarist of domestic violence.

The allegations recently resurfaced when the band confirmed that they will hold a reunion concert which includes Adoro.

The concert, titled “Huling El Bimbo,” is set to be staged on Dec. 22 at SMDC Festival Grounds. Actor Alden Richards revealed earlier this week that his new business venture, Myriad Corporation, was involved in making the reunion happen.  /ra