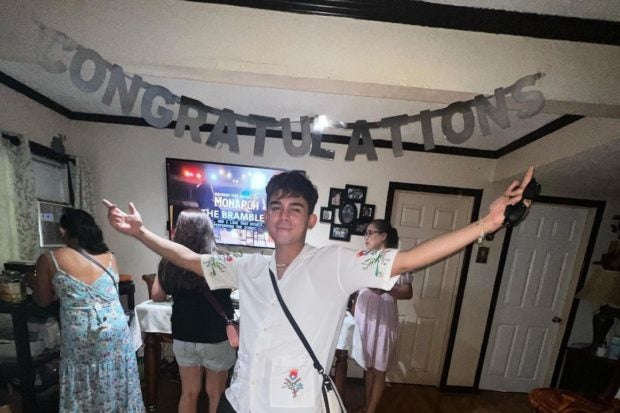 Iñigo Pascual got to celebrate the fulfillment of his Hollywood dream in the presence of family as he held a watch party with them in the home where he grew up.

The actor, who stars in the recently released Fox series “Monarch” alongside acclaimed actress Susan Sarandon, gave fans a glimpse of the intimate at-home gathering while expressing gratitude to his family via Instagram yesterday, Sept. 12.

Iñigo’s childhood home was decorated with banners bearing the word “Congratulations,” while his family enjoyed what appears to be baked treats and watched “Monarch” through a projector screen outside the house. Iñigo’s father, fellow actor Piolo Pascual, was noticeably absent from the party.

“Ever since I was doing school plays and choir performances as a kid, my family was always the loudest, and proudest in the room. It felt so good watching with them last night in the house I grew up in. Love you guys with all my heart!” Iñigo said.

“I’m so excited for everyone to finally meet Ace and the whole Roman family. Hope ya’ll can support!” he added.

Iñigo also looked back at the audition process he had gone through before landing a lead role in “Monarch,” as seen on his Instagram page yesterday.

“About a year ago, I auditioned for my first U.S. production. I was two weeks late for self-tape submissions ’cause in my head I knew I wasn’t gonna land the part. Fast forward to a year later and we’re all about to meet the Romans,” he told fans.

Iñigo thanked the people who encouraged him to audition for the part, as well as those who believed in him “when [he] barely did.”

Iñigo was cast to play talented and sensitive Ace Grayson back in September last year. His role is among the lead characters in the series alongside Ana Friel’s Nicky (Ace’s adoptive mother), Trace Adkins’ Albie (Ace’s grandfather) and Sarandon’s Dottie (Ace’s grandmother).

Aside from “Monarch,” Iñigo hopes to pursue more Hollywood shows or movies in the future. He said last week he is open to accepting projects not only in the United States but in other countries as well.

“Monarch” follows the story of America’s first family of country music, the Romans. It is described as a “Texas-sized, multi-generational musical drama.” It premiered yesterday, Sept. 12 (Sept. 11 in the US).

The show airs new episodes every Tuesday. It is available for streaming on Hulu after the episode comes out, and on iWantTFC, starting 9 a.m. every Thursday.  /ra