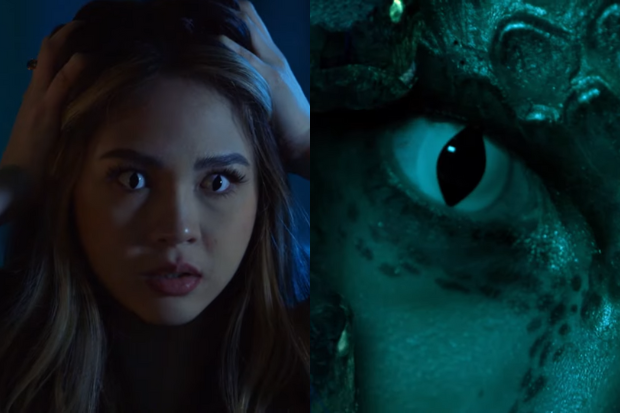 “Mars Ravelo’s Darna: The TV Series” has dropped a new teaser that gave fans a glimpse of actress Janella Salvador as the snake-haired supervillain Valentina.

The series’ new teaser was released on ABS-CBN Entertainment’s YouTube channel yesterday, July 22. It briefly showed Salvador’s transformation into Darna’s nemesis as her eyes turn into slits, and scales appear on her forehead.

A shadow cast on a wall also shows the outline of Salvador’s version of the supervillain and her snake hair. Previous teasers for “Mars Ravelo’s Darna: The TV Series” only showed Valentina in her human form.

Meanwhile, actress Jane de Leon who is portraying Narda and her superhero alter-ego Darna is yet to be seen in her full costume as of this writing, though fans got to see her in Darna’s red head gear in behind-the-scenes moments last May.

Salvador was revealed to play Valentina back in November last year. She and De Leon will be appearing in the series alongside fellow cast members Iza Calzado (Leonor, the first Darna), Joshua Garcia (De Leon’s love interest Brian) and Zaijian Jaranilla (Ding, Narda’s brother), among others.

The full trailer for “Mars Ravelo’s Darna: The TV Series” was released earlier this month, showing the superhero journey of Narda and her reluctance to fulfill her destiny of becoming Darna.

“Mars Ravelo’s Darna: The TV Series” started taping in November 2021 and is set to start airing on Aug. 15. It is directed by Chito Roño and Avel Sunpongco.  /ra