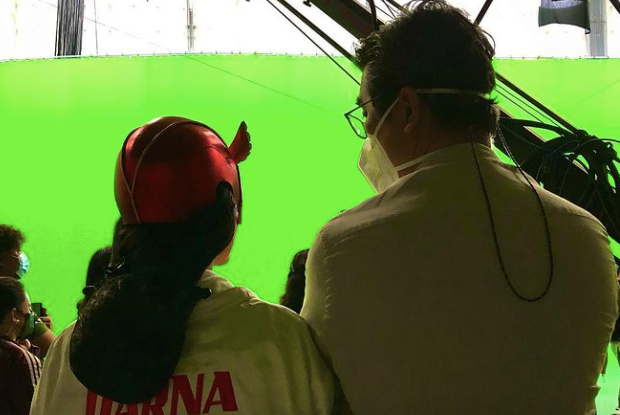 Fans caught a first look of the actress in Darna’s popular red head gear and boots via a behind-the-scenes footage on JRB Creative Production’s Instagram page yesterday, May 4. The rest of the costume is yet to be revealed since it was covered by a robe worn by De Leon.

De Leon can also be seen with ABS-CBN TV head Laurenti Dyogi as they talk in front of a green screen background. The behind-the-scenes footage was taken during Dyogi’s visit to the series’ set, JRB Creative Production stated.

“Mars Ravelo’s Darna: The TV Series” started taping in November last year. It is set to premiere this year.

It is helmed by acclaimed director Chito S. Roño and Avel Sunpongco of “FPJ’s Ang Probinsyano.”

De Leon is the third actress chosen to play Darna for this version. Angel Locsin, who played Darna in GMA Network’s 2005 TV adaptation, was supposed to take on the role in 2014 for a film, but she exited in 2015 due to health reasons. Fellow Kapamilya actress Liza Soberano replaced Locsin, but eventually withdrew from the role in 2019 because of a finger injury.  /ra