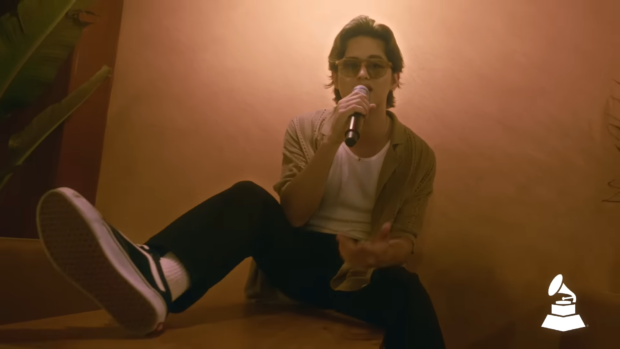 James Reid has marked another milestone in his music career as he was featured in a Recording Academy video series for his song “California Lovin.'”

The Recording Academy, which runs the annual Grammy Awards, released Reid’s debut performance of “California Lovin'” on its video series “Press Play at Home,” via its YouTube channel yesterday, May 27.

“In this episode of Press Play at Home, Reid showcases his influences with a performance of ‘California Lovin’,” a breezy and carefree bop,” it stated.

The Recording Academy also stated that “California Lovin'” was one of the first songs Reid made when he went to Los Angeles, California, to work on his career in music.

“Press Play at Home” is an online series by the Recording Academy where artists perform their new songs.

Meanwhile, “California Lovin'” is written by Reid along with producer Ken Nana and singer Darius Coleman. It is a “yearning pop song that conjures up the dreamy excitement of new love, daunted by distance but heady in the moment,” as per a release by the Recording Academy.

Reid left the Philippines last February to be in the United States. At the time, his father stated that he will be staying there for recording sessions and a family visit.

The actor-singer has since attended a viewing party hosted by British singer Elton John and released the song “Hello 2.0,” a remix of his 2021 track “Hello.” He was also recently spotted at a football game and the Gold Gala in Los Angeles with his friends as well as his fellow actor Liza Soberano, who is now managed by his team.

Reid has been managed by the Los Angeles-based agency Transparent Arts since October 2020. Other artists handled by the company are rapper Dumbfoundead, hiphop group Far East Movement and singer Tiffany Young.  /ra