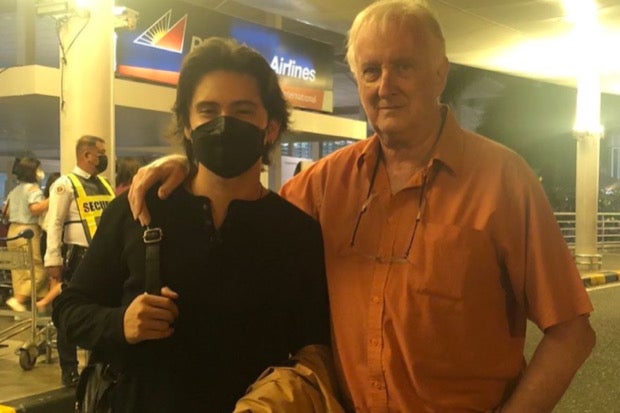 James Reid’s father Malcolm Reid stated that his son went to Los Angeles to attend to commitments regarding music, dismissing speculations that James moved there for good.

Prior to this, there was no official announcement about James’ departure which led some fans and netizens to think that the actor-musician might be leaving the country permanently.

Malcolm addressed the rumors while showing a photo of them together at the day of James’ departure, on Malcolm’s Instagram page last Saturday, Feb. 19.

“With James at [Ninoy Aquino International Airport] a few days ago. On his way to L.A. for recording sessions and to visit his brother Andrew,” he said. “That’s it. Anything else is basura (trash)… sorry to disappoint the fake newsmakers.”

Meanwhile, James was spotted at the party of his fellow Transparent Arts artist Dumbfounded, as seen in the videos reposted by fan account @jamesreidroyals on its Instagram page yesterday, Feb. 20. American singer and rapper Anderson .Paak was also at the said party.

James joined the L.A.-based label in October of 2020. Other artists handled by the company include Far East Movement and Tiffany Young.

James was sent off by his family last Thursday, Feb. 17. There’s no announcement of upcoming projects from the actor, as of writing. JB

Read Next
Park Bo-gum wraps up active-duty Navy service
EDITORS' PICK
High inflation: Your P1 is now worth only 87 centavos
UK’s Boris Johnson will resign, BBC reports
High-risk pregnancy: Reducing your risk is in your hands
Geek out at TOYCON 2022 powered by Smart Signature
House energy committee chair Arroyo bats for cheap electricity
Unemployment rate up to 6% in May
MOST READ
Suspect in grisly killing of missing woman in Bulacan arrested
Kim Atienza’s daughter flaunts bikini body in response to critics of her ‘revealing photos’
Japanese artist who created ‘Yu-Gi-Oh!’ found dead in the sea
FDA probes popular Filipino noodle brand for ‘high level of ethylene oxide’
Don't miss out on the latest news and information.