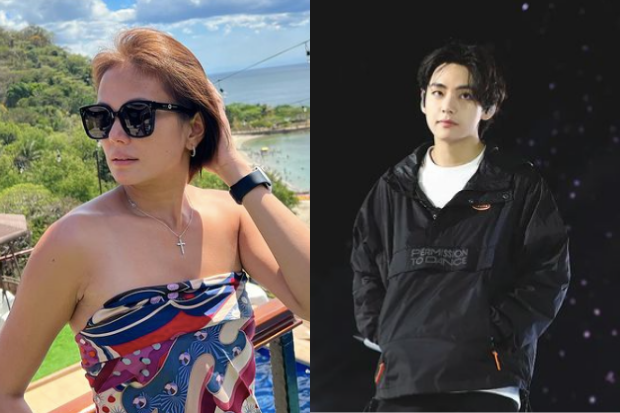 Isabel Oli is over the moon after she got noticed by Kim Tae-hyung, also known as V of the South Korean boy group BTS.

The actress showed via her Instagram page yesterday, April 12, that V had seen one of her recent Instagram Stories, an art card stating, “Sometimes we worry so much that we don’t stop and realize, God’s got it!”

Netizens and fellow BTS fans on Instagram expressed jealousy over Oli’s fan moment and jokingly asked her to make a “prayer reveal.”

“Makatulog ka kaya niyan (Can you sleep with that)?” one @mavictagbo asked Oli.

BTS is one of the most popular K-pop groups today. They were named Artist of the Year at the American Music Awards 2021 and have received various other recognitions.

In December last year, V broke two Guinness World Records as the fastest to gain followers on Instagram. He gained one million followers on the platform in only 43 minutes and earned 10 million in four hours and 52 minutes.  /ra

Read Next
Rihanna reveals it took a while for A$AP Rocky to break free from friend zone
EDITORS' PICK
House energy committee chair Arroyo bats for cheap electricity
Karding damage to infrastructure at P23M
Bongbong Marcos says PH ‘open for business’ with new Clark Airport terminal
Individuals affected by ‘Karding’ now over 157,000
Reignite your passion with the vivo Y35
Newbie gamers are in for a treat with the power-packed feature of vivo Y16
MOST READ
Angelica Panganiban ‘duguan, sugatang mom’ one week into breastfeeding
LPA enters PAR, may develop into tropical depression
LOOK: Gwyneth Paltrow goes nude and golden in 50th birthday shoot
Charges readied vs gov’t guard with P290-M deposits
Don't miss out on the latest news and information.