BTS named artist of the year at 2021 American Music Awards 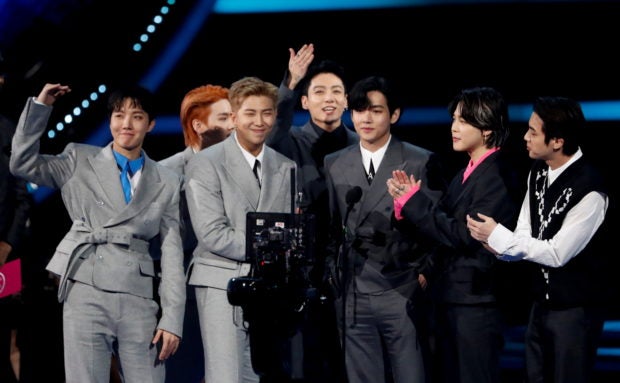 South Korean boy group BTS was named artist of the year at the American Music Awards show in Los Angeles on Sunday, Nov. 21 — the top prize at the world’s largest fan-voted ceremony.

BTS and Swift were among the early winners at the American Music Awards, in a show hosted live by rapper Cardi B.

BTS was named favorite pop group, the first of three awards it was nominated for on the awards show.

“We’re just a small boy band from Korea which just united by the love of music and all we want to do is spread good vibes,” BTS singer Kim Nam-Joon, known as RM, said.

BTS joined Coldplay on stage for a rendition of their single “My Universe” in a post-pandemic return to live performances for the K-pop group, whose single “Butter” ruled the Billboard singles charts in the United States for 10 weeks this summer.

Swift, who did not attend Sunday’s ceremony, last year won the title for a record sixth time. On Sunday, she took home the trophies for favorite female artist and best pop album for her lockdown album “evermore.”

“I’m so lucky to be in your life and to get to have you in mine,” Swift told fans in a video acceptance speech.

First-time host Cardi B pulled off a series of extravagant costume changes and confessed she was worried about messing up.

Rodrigo, 18, who burst onto the charts in January, went into Sunday’s show with a leading seven nods including artist of the year, best new artist and favorite pop song for her debut single “drivers license.”

Doja Cat picked up three awards on Sunday, including for her “Kiss Me More” collaboration with SZA. Meanwhile, Megan Thee Stallion, who on Saturday pulled out of performing on the show citing personal issues, won for favorite female hip-hop artist.

The nominees were based on Billboard music chart performance, streaming and album sales, radio play and social media engagement, and the winners were chosen entirely by fans. DC