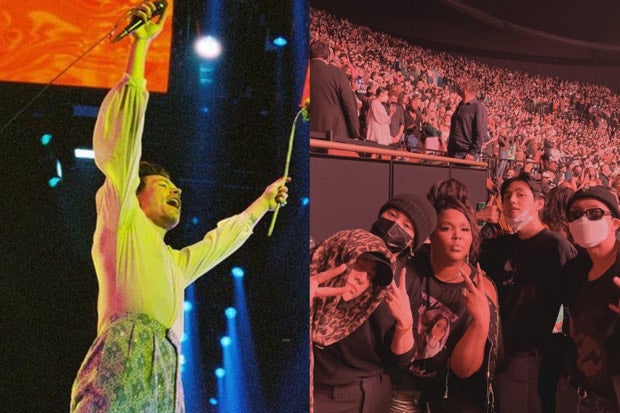 The K-pop superstars sang their lungs out to Styles’ “Falling,” as seen in a video posted on their official Twitter account yesterday, Nov. 20.

American singer Lizzo, who was also at the show, was seen jamming with the BTS members.

Photos of them were posted as well on BTS’ Twitter account, which the singer shared on hers on the same day, as she said, “I met [BTS].”

Fans of the K-pop boy group were surprised at the members’ appearance at the concert. Some expressed their excitement for seeing the boys up close and personal, as seen on their Twitter accounts, where they also shared clips and images from the concert.

Oh to be in that Harry Styles’ Concert. 😭😭😭 Imagine seeing BTS and Harry Styles in one day. I would explode. pic.twitter.com/7459mQvDqm

I WENT TO SEE HARRY STYLES TONIGHT BUT WHO WOULD’VE THOUGHT THAT I WOULD SEE HARRY AND BTS AT THE SAME TIME AGDJAGSJSHD pic.twitter.com/LVpqCHKLdD

BTS arrived in Los Angeles for their four-day sold out “Permission to Dance on Stage” concert on Nov. 27 to 28 and Dec. 1 to 2, which is their first live concert in two years.

They are also set to perform their collaborative single with Coldplay “My Universe” and “Butter” remix with Megan Thee Stallion at the American Music Awards on Nov. 21. Unfortunately, Megan announced that she will no longer attend the event, citing an “unexpected personal matter.” JB

Read Next
Leonardo DiCaprio tackles climate crisis in satire ‘Don’t Look Up’
EDITORS' PICK
Palace: Malls, establishments may require customers to use of face shields
Syringes for Pfizer vaccine arriving on December 2 — NVOC chairperson
Smart offers wireless fiber-like speeds to Filipino homes with country’s first 5G Prepaid Home WiFi
Legarda: Ending Violence Against Women, a cause for all
This new condo in the South will make you want to turn a new leaf
Disease expert: Omicron variant may behave like Delta
MOST READ
Bongbong Marcos to face another disqualification case
Christine Bersola, Julius Babao cleared of cancer after colonoscopy, endoscopy
Former PM Abe says Japan, US could not stand by if China attacked Taiwan
Tropical storm intensifies as it approaches PAR
Don't miss out on the latest news and information.