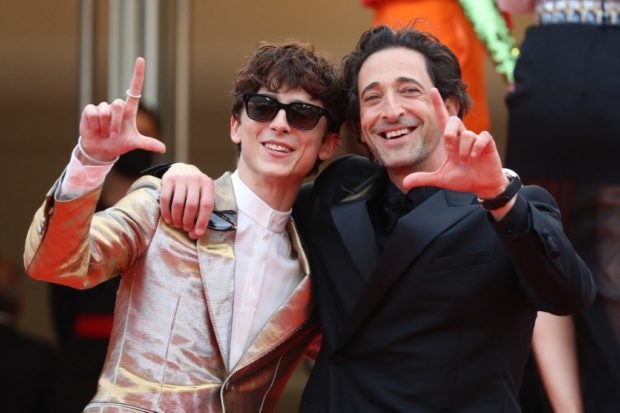 French-American actor Timothée Chalamet (left) American actor Adrien Brody pose as they arrive for the screening of the film “The French Dispatch” at the 74th edition of the Cannes Film Festival in Cannes, southern France, on July 12, 2021. Image: AFP/Valery Hache

Wes Anderson’s “The French Dispatch” has made its mark at the 74th Cannes Film Festival by earning a 9-minute standing ovation in its premiere yesterday, July 12.

The much-earned applause is said to have been one of the biggest ones so far in the said festival, as per Variety on the same day.

Anderson’s latest film boasts a star-studded cast including Bill Murray, Benicio del Toro, Owen Wilson, Tilda Swinton, Adrien Brody, Stephen Park and Timothée Chalamet. Lea Seydoux, however, was unable to join her castmates as she is in quarantine in Paris after testing positive for COVID-19.

Sticking to the theme of the film, the cast and composer Alexandre Desplat arrived together at the festival riding a giant gold party bus with French motorcycle police as escorts.

“The French Dispatch” was described as a “love letter to journalism,” as per report, although Anderson has so far refused to hold press conferences and accept interviews about his latest film, following tradition with in-competition films.

After the two-hour premiere, the festival erupted in a chorus of applause and praises with Anderson going to each cast member to hug them.

“I hope we come back with another one soon. Thank you,” Anderson was quoted as saying to the crowd, who kept on cheering as he left the venue.

“The French Dispatch” is set to be released in theaters in October this year. It was first set to premiere in Cannes 2020, but has since been delayed twice due to the pandemic. Ian Biong/JB