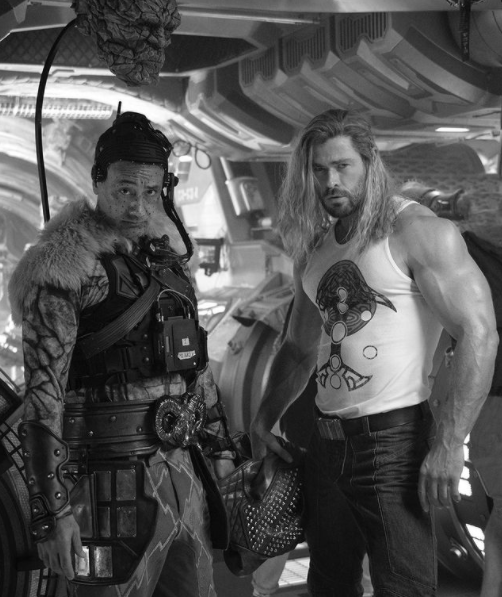 Chris Hemsworth announced that “Thor: Love and Thunder” has finally wrapped filming while showing off his massive physique as the God of Thunder.

The post came with a black-and-white photo showing Hemsworth in top shape as the Norse god, a far departure from his “Fat Thor” look in “Avengers: Endgame,” the last film he was in.

Oscar-winning director Taika Waititi also joined Hemsworth in the photo, which shows him in costume as Korg. Waititi first played the character in “Thor: Ragnarok,” which is also the first “Thor” film he directed.

“The film is gonna be batsh*t crazy off the wall funny and might also pull a heartstring or two. Lots of love, lots of thunder!” Hemsworth stressed.

“Thank you to all the cast and crew who made this another incredible Marvel journey. Buckle in, get ready and see ya in cinemas!!” he added.

While not much has been revealed about the said film, it has been confirmed that Christian Bale is playing Gorr the God Butcher as the main villain.

Tessa Thompson will reprise her role as Valkyrie, while Chris Pratt’s Peter Quill and the Guardians of the Galaxy will also be making an appearance.

“Thor: Love and Thunder” will also introduce the first of Marvel’s Greek gods in the Marvel Cinematic Universe (MCU), as Russell Crowe has confirmed that he will be playing Zeus in the film.

Natalie Portman, who last appeared in the second “Thor” movie, “Thor: The Dark World,” will, meanwhile, reprise her role as Dr. Jane Foster, who will also be taking on the mantle of the Mighty Thor in the upcoming film. Jamie Alexander will also be returning to the MCU as Lady Sif.

“Thor: Love and Thunder,” the fourth installment in the “Thor” franchise, is expected to hit cinemas on May 6, 2022. Principal photography was done in Sydney, Australia.  /ra