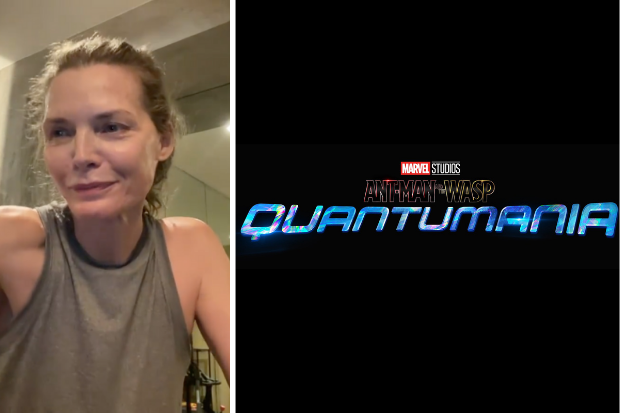 Michelle Pfeiffer will be reprising her role as Janet Van Dyne in “Ant-Man and the Wasp: Quantumania.” Images: Instagram/@michellfepfeifferofficial, Twitter/@MarvelStudios

Golden Globe winner Michelle Pfeiffer treated fans of the Marvel Cinematic Universe (MCU) to a workout video as she shapes up for the upcoming “Ant-Man” film in 2023.

Pfeiffer, who first appeared as Janet Van Dyne – the first Wasp – in “Ant-Man and the Wasp,” shared a clip of her on a treadmill, getting ready for her second MCU outing via Instagram yesterday, May 31.

“Janet Van Dyne entering the Quantum Realm,” Pfeiffer said in the video just before she started running on the treadmill. “I’ll be ready.”

Pfeiffer was last seen getting turned into dust in the end-credits scene of “Ant-Man and the Wasp,” but went back into existence offscreen in “Avengers: Endgame” back in 2019.

She will be reprising her role as the lover of Michael Douglas’ Hank Pym and the mother of Evangeline Lilly’s Hope Van Dyne, the current Wasp. Paul Rudd will play the titular role of Scott Lang a.k.a. Ant-Man once again as they venture deeper into the mystery behind the MCU’s Quantum Realm.

Jonathan Majors will, meanwhile, play the time-traveling villain Kang the Conqueror, a big bad from the comics, who has the potential to replace Thanos in the MCU.