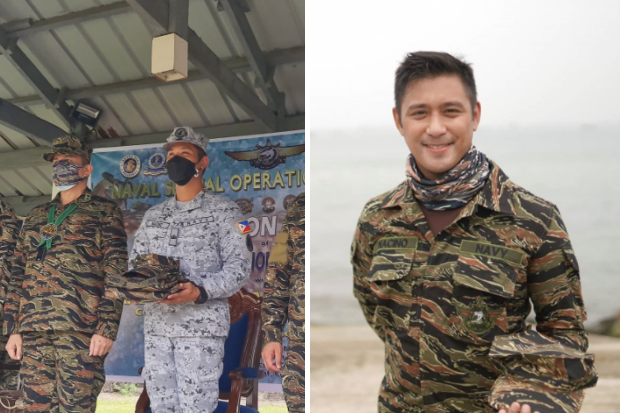 Kapuso star Rocco Nacino has received the Tiger Battle Dress Uniform (BDU) as an honorary member of the Naval Special Operations Group of the Philippine Navy.

The “Descendants of the Sun” actor took to Instagram yesterday, Sept. 25, to share the good news and give fans a glimpse of him donning his new uniform.

“Accolade unlocked! Today as I was awarded the Tiger BDU as an honorary member of NAVSOG […], I asked myself how I got to this point in life,” he said.

Nacino admitted to having had selfish goals when he started as a reservist, although he realized later on that he was “doing this to be an example to the young ones that anything can be achieved as long as you put your heart into it.”

The post came with several photos of Nacino in his Tiger BDU with some people including his girlfriend, volleyball athlete Melissa Gohing.

(I thought my suffering was over after we from the Alpha Team took the Special Forces training for “Descendants of the Sun,” but it turns out that I will experience it all over again in our culminating activities to be inducted into NAVSOG courses.)

Nacino also shared that he found it amusing when he was told that he has made into reality what Diego “Wolf” Ramos, his character from the show, wears as a Special Forces technical sergeant.

“Thank you Philippine Navy, NAVSOG, AFP, for this honor and I am excited to take on more challenges and learnings with the leadership of our officers. Para sa Pilipinas, Hooyahhh!” he said.

Nacino is one of the many celebrities who have joined the military as reservists. The list includes Winwyn Marquez, Dingdong Dantes, Arci Muñoz, JM De Guzman, Gerald Anderson and Robin Padilla.  /ra