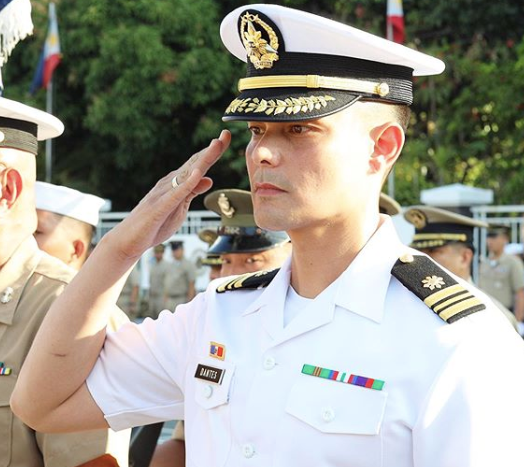 After being bestowed the rank of lieutenant commander by the Philippine Navy, Dingdong Dantes noted that the ability to serve and love the country is not caged by one’s uniform or profession.

The marine reservist shared an excerpt from his speech during the donning of ranks ceremony held last Monday, Jan. 27 at the Philippine Navy headquarters via Instagram the next day.

(One’s love for country and service to others is not only measured by being a soldier or being a member of the military.)

Dantes commended other professions for having their own ways to serve the country, mentioning teachers, doctors, nurses, social workers, security guards, construction workers, call center agents and “Angkas” drivers, among others.

(Whether you work for the government or the private sector, whether you have a position or are a regular worker, a soldier or an actor, we all hold the “heart” of a hero.)

“So whatever uniform we may be in today, be it your soldier’s uniform or your usual office attire, let’s not forget to put on our strongest hearts, and commit ourselves to be heroes in our own ways,” Dantes added.

Dantes then shared a quote he said is “very close to my own heart,” which read: “Heroism lies in the nobility of committing to a way of life that focuses on goals that are greater than oneself.”

The lieutenant commander through another post shared snippets of the ceremony, which he said was attended by two important women who appreciated his earned “OOTD” (outfit of the day).

“That moment when the [two] important women in my life appreciate an OOTD that’s not bought, but earned. Ang nanay ko na nasa likod ko, at… ang asawa ko… na nasa harap (My mother behind me and my wife in front),” he said.

The rank of lieutenant commander is a rank higher than a lieutenant but lower than a commander. Dantes enlisted as a reservist for the Philippine Marine Reserve Force back in 2006, then formally became a marine reservist in 2009. He renewed his enlistment in 2017.

Read Next
Dimples Romana says she is ‘the most bungisngis kontrabida of all’
EDITORS' PICK
Geek out at TOYCON 2022 powered by Smart Signature
UK’s Boris Johnson will resign, BBC reports
High-risk pregnancy: Reducing your risk is in your hands
House energy committee chair Arroyo bats for cheap electricity
High inflation: Your P1 is now worth only 87 centavos
Unemployment rate up to 6% in May
MOST READ
Suspect in grisly killing of missing woman in Bulacan arrested
Hong Kong suspends flight bans as it eases COVID-19 rules
Bongbong Marcos’ first order: Abolish PACC, Office of Cabinet Secretary
Kim Atienza’s daughter flaunts bikini body in response to critics of her ‘revealing photos’
Follow @IBiongINQ on Twitter
Don't miss out on the latest news and information.