Robin Padilla is next celebrity to join the Army reserve 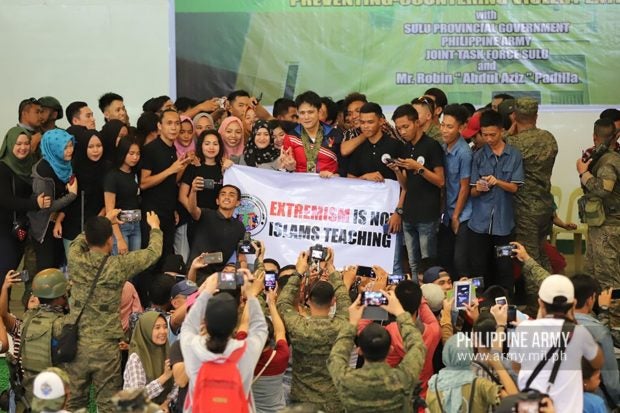 PHOTO from the Philippine Army

MANILA, Philippines — It seems that actor Robin Padilla is following the footsteps of his fellow celebrity Matteo Guidicelli to join the Philippine Army’s reserve force.

On Sunday, he joined the Philippine Army’s trip to Sulu to speak in a youth forum sponsored by the 11th Infantry Division to promote peace. Guidicelli, who recently completed the Scout Ranger Orientation Course after joining the Army as a reservist, was also present at the event.

Padilla announced his plans to become an Army reservist, which was welcomed by Army spokesperson Lt. Col. Ramon Zagala.

“We thank Mr. Robin Padilla for his time and effort to advocate peace and unity to the people, especially those who are affected by the threat of violent extremists. We welcome his desire to join the Army Reserve Component and contribute more to the Army’s thrusts of nation-building,” he said.

He also called on ordinary citizens to join the reserve force.

“The Philippine Army opens its doors to people like Robin Padilla who volunteers to serve the country,” Zagala said. (Editor: Eden Estopace)