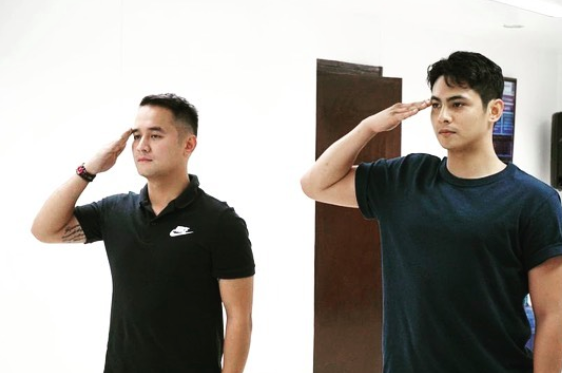 Kapamilya actors JM de Guzman and Kiko Estrada are set to join the military as they start their reservist training under the Philippine Air Force (PAF).

The two made the “first step” of their military journey at the PAF Officers Clubhouse inside the Villamor Airbase in Pasay City, based on De Guzman’s post  on Instagram yesterday, March 9.

“Me and Kiko Estrada learning courtesy and drills. First step on our way to [Air Force] reserve,” the actor noted.

Me and Kiko Estrada learning courtesy and drills. first step on our way to airforce reserve. thank you coach for the guidance staff sgt. Jimmy Jandog Angana. 1Lt Shahani Ballares for the lectures and Col. Bon Castillo for welcoming us. ♥️🙏🇵🇭

The “Pamilya Ko” co-stars listened to lectures and learned rifle drills, among others, as seen in the series of photos. De Guzman also thanked the officers in charge of the training, namely Staff Sgt. Jimmy Jandog Angana, 1LT. Shahani Ballares and Col. Bon Castillo.

De Guzman earlier broke the news also via Instagram that he would be undergoing the Basic Citizen Military Training program under the PAF last Thursday, March 5.

De Guzman and Estrada will be joining other celebrities who are part of the country’s reserve force. Some celebrities include Navy reservist Dingdong Dantes, who earned the rank of lieutenant commander last January, and Matteo Guidicelli, who enlisted as an Army reservist in April 2019 and underwent Scout Ranger training in May.  /ra