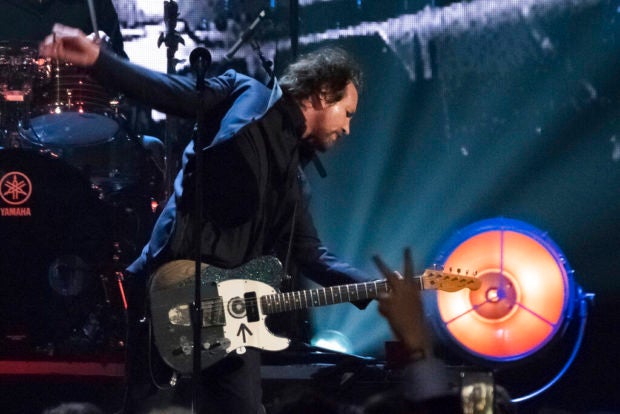 Eddie Vedder from the band Pearl Jam performs at the 2017 Rock and Roll Hall of Fame induction ceremony at the Barclays Center in New York. AP FILE PHOTO

LOS ANGELES — Pearl Jam is postponing the North American leg of its Gigaton world tour because of concerns over the new coronavirus, the band announced Monday.

Seventeen U.S. and Canadian performances, beginning on March 18 in Toronto through April 19 in Oakland, California, were indefinitely postponed, according to the band’s website.

Pearl Jam said it was announcing the postponements “with deep frustration and regret.”

“The levels of risk to our audience and their communities is simply too high for our comfort level,” a band statement said. “Add to that we also have a unique group of passionate fans who travel far and wide. We’ve always been humbled by this and respect their energies and devotion. However in this case, travel is something to avoid.”

New dates will be determined and current tickets will be honored for those dates, the band said.

For now, the European shows from June 23 to July 23 are still scheduled along with two September shows in Asbury Park in New Jersey, and Dana Point in California, according to the band’s website.

Band members said they were personally being affected by the COVID-19 health fears. The band is from Washington state, where two dozen people have died, most of them at a Seattle-area nursing home.

“As residents of the city of Seattle, we’ve been hit hard and have witnessed firsthand how quickly these disastrous situations can escalate,” the band said. “Our kids’ schools have closed along with universities and businesses. It’s been brutal.”

Band members also criticized a lack of clarity from the government when it comes to staying safe and going to work, saying they didn’t believe the virus would be controlled in the coming weeks.

“The tour we’ve been busy planning for months is now in jeopardy,” the band said. “We have and will always keep the safety and well-being of our supporters as top priority.”